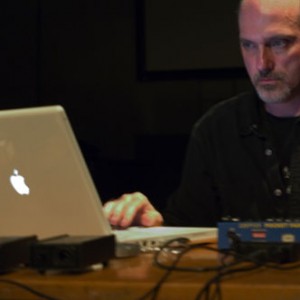 Kim Cascone has been involved with electronic music since the early 70's. After receiving his musical training at the Berklee College of Music in Boston in the early 1970's, he went on to study privately at the New School in New York City with composer Dana McCurdy. After building an Aries modular synthesizer and developing skills with electronics, Cascone worked as a technician for audio companies such as Crumar, Eventide and Orban.

After building an Aries modular synthesizer and developing skills with electronics, Cascone worked as a technician for audio companies such as Crumar, Eventide and Orban.

After moving to San Francisco in 1983 Cascone started the musical project PGR, which went on to gain a reputation in the Industrial Music genre for its brooding dark cinematic soundscapes.

Later, Cascone worked with David Lynch as Assistant Music Editor on both Twin Peaks and Wild at Heart.

Cascone left the film industry in 1991 to concentrate on Silent Records, a label that he founded in 1986, transforming it into the U.S.'s premier electronic music label.

Cascone then sold Silent in early 1996, at the height of its success, in order to pursue a career in the fast paced dot.com world of Silicon Valley.

After working at Headspace Cascone became the Director of Content at Staccato Systems, a small company spun out from research conducted at Stanford University. While at Staccato he oversaw sound design for video games using algorithmic synthesis.

Since the infamous dot.com bubble burst in 2001 Cascone has been traveling the globe performing music, lecturing on post-digital aesthetics and conducting composition workshops.

Since 1985 Cascone has released over 30 albums of electronic music and has recorded/performed with Merzbow, Keith Rowe, Tony Conrad, Scanner, John Tilbury, and Pauline Oliveros to name a few.