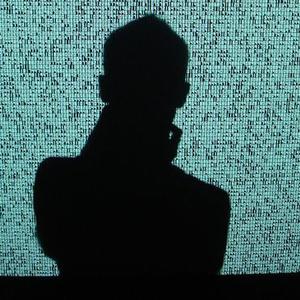 Born in 1966, Japan's leading electronic composer Ryoji Ikeda (Japanese ????) focuses on the minutiae of ultrasonics, frequencies and the essential characteristics of sound itself. His work exploits sound's physical property, its causality with human perception and mathematical dianoia as music, time and space. Using computer and digital technology to the utmost limit, Ikeda has been developing particular "microscopic" methods for sound engineering and composition.

Since 1995 he has been intensely active in sound art through concerts, installations and recordings: the albums +/- (1996), 0 degrees (1998) and Matrix (2000) have been hailed by critics as the most radical and innovative examples of contemporary electronic music. With Carsten Nicolai, he works the collaborative project Cyclo., which examines error structures and repetitive loops in software and computer programmed music, with audiovisual modules for real time sound visualization. The versatile range of his research is also demonstrated by the collaborations with choreographer William Forsythe/Frankfurt Ballett, contemporary artist Hiroshi Sugimoto, architect Toyo Ito and artist collective Dumb Type, among others. Ryoji Ikeda received the Golden Nica prize at Prix Ars Electronica 2001 in the Digital Music category.

Music For Percussion (With Eklekto)

See You At Regis Debray