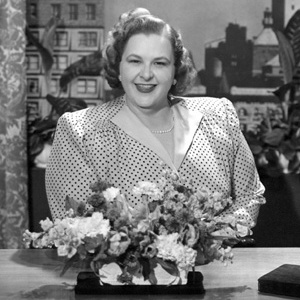 Kathryn Elizabeth Smith (May 1, 1907 ? June 17, 1986) was a Washington, D.C.-born singer best known for her rendition of Irving Berlin's "God Bless America". She was one of America's most beloved entertainers, with a radio, TV and recording career that spanned five decades, and which reached its most-remembered zenith in the 1940s. Her musical career began in earnest when she was discovered in 1930 by Columbia Records vice president Ted Collins, who became her longtime partner and manager and who put her on the radio in 1931.

Her musical career began in earnest when she was discovered in 1930 by Columbia Records vice president Ted Collins, who became her longtime partner and manager and who put her on the radio in 1931. She sang the controversial top twenty song of 1931, "That's Why Darkies Were Born". She starred in the 1932 movie Hello Everybody!, with co-stars Randolph Scott and Sally Blane, and in 1943 she sang "God Bless America" in the wartime picture This is the Army. Irving Berlin had written the song in 1938 for her, and it is considered "the second National Anthem" of the United States. Its popularity and constant airplay led Woody Guthrie to pen the original version of "This Land Is Your Land" in protest at the Berlin tune's unquestioning complacency.

For eight years (1937-45), The Kate Smith Hour was a leading radio variety show, offering comedy, music and drama with appearances by top personalities of films and theater. The nationwide audience was introduced to comedy by the show's resident comics, Abbott and Costello and Henny Youngman, while a series of sketches led to The Aldrich Family as a spin-off in 1940. She continued into the 1950s on the Mutual Broadcasting System, CBS, ABC and NBC, doing both music and talk shows.

An unusual part of her career began on December 11, 1969, when the Philadelphia Flyers hockey team played her rendition of "God Bless America" before the game. Philadelphia beat the Toronto Maple Leafs, 6-3. The team would begin to play the song before home games every once in a while, and the perception developed that the team was more successful on these occasions, so the tradition grew.

Kate Smith, who never married, died of diabetes at the age of 79 in Raleigh, North Carolina, several years after converting to Roman Catholicism. (from Wikipedia)

The Best Of Kate Smith (Remastered 2010)