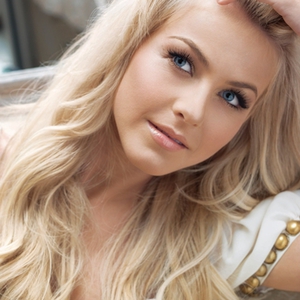 Born July 20, 1988, Julianne Hough is an American professional country music singer, ballroom dancer, and television celebrity. The television newsmagazine, 20/20, has described her as one of the "very best dancers on the planet." She has won several international titles. Julianne is the youngest professional dancer ever to have competed on the televised competition Dancing with the Stars. She won the overall title in her first year on the show, as she coached her amateur dance partner, Olympic speed skater Apolo Anton Ohno.

Julianne is the youngest professional dancer ever to have competed on the televised competition Dancing with the Stars. She won the overall title in her first year on the show, as she coached her amateur dance partner, Olympic speed skater Apolo Anton Ohno. She defended her championship the following season with Indianapolis 500 champion H?lio Castroneves, matching the back-to-back wins of fellow professional dancer Cheryl Burke. Hough appeared on season 6 of Dancing With the Stars with actor/comedian Adam Carolla. Following her elimination from the show on April 8, 2008, Julianne's lifelong dream came true when she was signed to Mercury Nashville Records as a recording artist. Her debut single is That Song in My Head from her debut album, Julianne Hough ? the highest selling new album since 2006.

Growing up one of five Utah-born siblings, Julianne says her family was sometimes referred to as the ?blonde Osmonds,? earning a reputation for their talent and professionalism. When her parents separated when she was 10, Julianne immersed herself in dancing and was later given an opportunity to study performing arts in London. This began a period of intense training and being far away from family and in a fast-paced city, was forced to grow up fast.

Indeed, Julianne Hough is living her hallelujah song. After years of success in the dance field, she has finally landed an opportunity to sing country music and she is reveling in the opportunity. Julianne Hough's debut is a compelling collection of songs about the joys and challenges of everyday life delivered by an evocative young voice. It is the perfect vehicle to carry her from her successful day job to the realization of a dream come true.

?I was scared that people would say, ?Just because she got a little bit of recognition on the TV show, she thinks she can make a record,'? she confesses, ?but I've been wanting to do this a long, long time and I hope the music speaks for itself.?

Sounds Of The Season: Holiday Collection