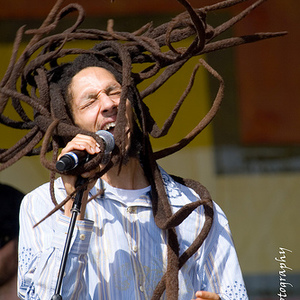 Julian Ricardo Marley, ? 4 June in London is a British reggae musician and singer, son of Bob Marley and Lucy Pounder. He is a member of the Rastafarian house The Twelve Tribes of Israel . His childhood was spent between England and Jamaica, and he learned to play the keyboard, drums, bass, guitar, and various percussion instruments. Together with his brothers Ziggy Marley and Stephen Marley , Julian became an active partner of Ghetto Youth International, a production company, in 1989. He has released three albums: Lion In The Morning (1996), A Time & Place (2003), Awake (2009)

For Julian Marley, music is life, life is music, and both are blessings from above. "From a small age music has been there in my life. It's just natural. And it is with the inspiration of the Most High that I create my songs," he explains. Julian's development as a singer/songwriter began when, at age five, he recorded his first demo tape, a version of his father's classic composition, "Slave Driver," at the Marley family's Tuff Gong studio in Kingston. Since that auspicious beginning, Julian has devoted himself to a life in music, mastering a variety of instruments and writing songs that reflects his dedication to spiritual boost and social change.

The 90s were a watershed period for the young artist. During these years, Julian formed his own band (the Uprising band), released a critically acclaimed album (1996's Lion in the Morning, on which he wrote or co-wrote all the songs) and toured the world, both as a solo performer backed by Uprising and as a member of Ghetto Youths International, a musical collective whose core members are Julian and his brothers, Stephen and Damian Marley. Together, Julian and Damian were the opening act for Ziggy Marley and the Melody Makers' 1995 US tour and featured artists in 1997 on the rock-oriented Lollapalooza festival tour. Julian also assisted his brother Stephen with production on 1999's platinum selling Chant Down Babylon and, along with Spragga Benz and Marley siblings Stephen, Cedella, Damian and Ky-mani Marley , contributed an inspired version of "Master Blaster" to the 2003 Stevie Wonder tribute album, Conception.

Julian's newest offering, A Time and Place, is an organic fusion of rootical reggae and breezy jazz sounds that represent the next milestone in his artistic path. "Coming from Lion in the Morning," Julian explains, "I have more knowledge and I'm growing. And this is a very personal album. A lot of it came from reasoning with bredren. We would converse about a situation and just start writing from there." The thirteen tracks are, as the artist himself says, "very much of the time. If you check it out right now, most of the music out there is about bling blings and crazy things. My songs are to be taken as wake up calls." Each is built on a solid foundation of traditional reggae but contain a wide range of influences, showcasing Julian's natural love of music