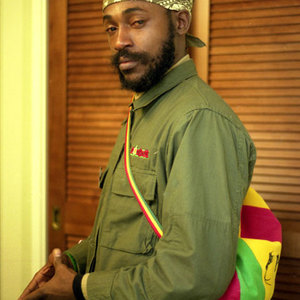 " ... Rastafari livity means to tolerate and to live side by side with those of other faiths no matter which race, no matter which class. The purpose of Haile Selassie is to see that we become one in unity and love ... and that is my purpose." Lutan Fyah Much, much more than a deejay, much more than a singer and more than a chanter too Lutan Fyah also plays guitar, keyboards and the kette drum. He holds strong beliefs in originality at all times and so he is a songwriter too and, as the New Millennium has progressed, he has developed his very own idiosyncratic and unique vocal styling.

Much, much more than a deejay, much more than a singer and more than a chanter too Lutan Fyah also plays guitar, keyboards and the kette drum. He holds strong beliefs in originality at all times and so he is a songwriter too and, as the New Millennium has progressed, he has developed his very own idiosyncratic and unique vocal styling. He embraced the Rastafarian religion at the age of sixteen but his songs are not always strictly Rasta. As a "living man with work to do" he ranges over all subjects and everything and anything can inspire him to write, to play, to chant, to sing and to deejay. Preaching to the converted can prove to be a fairly easy task but to take the same message all around the world is a totally different ball game.

Born Anthony Martin in Thompson Pen, Spanish Town in the parish of St. Catherine, Jamaica his formative years were spent in an environment where music was omnipresent. His grandfather ran a Sound System and artists such as Lt. Stitchie, Papa San and Lady G would gather in the family's yard to practise and perfect their skills on the microphone.

"I grew up around a Sound System. Music flows through my bones ..." Lutan Fyah

Music proved to be an incredible influence on young Anthony but sport, and football in particular, proved to be another and he started playing as a midfielder, a position where he excelled, in teams in his local community. He graduated to his school team, St. Andrew Technical High School, and eventually made the grade as a professional in Jamaican Premier League clubs De la Vega and Constant Spring; but the call of music proved too strong to resist and in 1999 he hung up his football boots and took the first steps towards a musical career.

Like so many others before and after Anthony Martin trod that same dispiriting round of Kingston's studios and record producers where he was met with indifference and at times ignorance. However there was a different reception at Mark Myrie's Aksum Studios where the young chanter's promise was immediately recognised and he passed his audition with flying colours. The man now known as Lutan Fyah spent what he terms his 'internship' at Gargamel where he recorded over sixteen songs for Buju Banton while also freelancing for other producers. His debut release was actually for the Crazy Hate label and 'Ambassador' signalled the arrival of a significant new talent in Kingston's musical maelstrom.

The resurgence of the Rastafarian influence and the Bobo Dread phenomenon in reggae music was an indicator of serious times in Jamaica as a new generation of singers and deejays came to the conclusion that the only credible solution to the current malaise was to "love the word of God and thy neighbour as thyself". Others, who shall remain nameless, were not slow to realise that this presented a heaven sent opportunity to jump aboard the bandwagon for a handy ride on the fast track to fame and money. Many futile attempts were made to hitch a ride to stardom and the words of God were readily mouthed by tongues that had previously been wrapped around the more worldly concerns of the dance hall. But artists such as Lutan Fyah were there for the long run for "the race is not to the swift" and his music was at all times driven by his deep beliefs. His devotion to the Rastafarian religion has meant that he has stayed the course while so many pretenders have fallen by the wayside.

Get Rid A Di Wicked