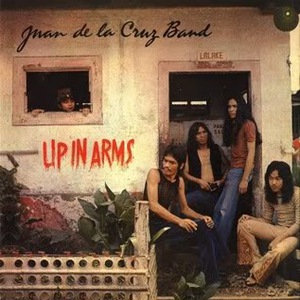 Juan De La Cruz were a Filipino rock band and part of the movement known as Pinoy Rock. Wally Gonzalez, Pepe Smith and Mike Hanopol played together as The Downbeats in 1967, then as Zero History in Japan in 1969. Pepe and Mike joined Speed, Glue and Shinki in Japan, while Wally went back to the Philipines in 1970 and formed Juan De La Cruz, which the others joined after their poorly received first LP 'Up In Arms'.

The new line up was more successful and in-between touring released the albums Himig Natin (1973), the title track of which became the band's biggest hit and calling card, Super Session (1974), a live LP, and Maskara (1974) after which they went on hiatus, releasing solo LPs and bringing up their families. The released Greatest Hits Live, The Best of Juan de la Cruz Band (1980) and Kahit Anong Mangyari (1981) before finally calling it a day. They reformed for one-off gigs in 1998 and in 2005 for Philipine Independence Day and the individual members are still playing and recording music.