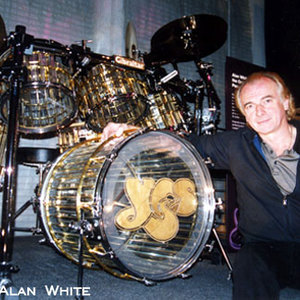 Alan White (born 14 June 1949) is an English rock and roll drummer best known for his 36 years of work with the progressive rock band Yes. In all, White has appeared on over fifty albums with artists from John Lennon and George Harrison to Joe Cocker, Ginger Baker and The Ventures. Born in Pelton, County Durham, White began learning to play the piano at age six and after switching to drums, played publicly with a local band at 13.

Born in Pelton, County Durham, White began learning to play the piano at age six and after switching to drums, played publicly with a local band at 13. Later he worked with a number of bands during the late 1960s, notably the Alan Price Set, before being invited to join Ginger Baker's Airforce with Steve Winwood in 1968. The following year, 1969, White received a call from John Lennon (he thought it was a prankster) asking him to join the Plastic Ono Band for a show that became the hit album, Live Peace in Toronto. He also performed with Lennon on the legendary Imagine album and the single, "Instant Karma". When Lennon introduced White to fellow Beatle alumnus, George Harrison, he was asked to perform on the All Things Must Pass album, including the single, "My Sweet Lord".

In 1972, White was touring with Joe Cocker when he received an invitation to join Yes, to replace Bill Bruford who had left to join King Crimson. Three days after meeting with Jon Anderson and Chris Squire, White played at the first show of the group's US Close to the Edge tour. Despite the fact that White had spent time in the studio with the band and even tried playing some of the Close to the Edge material, it is something of a legend that he learned the entire repertoire of extremely complex music in just three days. White and the band gave each other three months to see if he fit in, and over thirty years later, he has appeared on every Yes album since.

Alan White released his only solo album, Ramshackled, in 1976. However, it is usually considered a White solo album in name only, as everything except the drumming (and including all the songwriting) is done by the various musicians White gathered to help with the project.

In addition to his drum playing, White has played piano and written music for several Yes albums. When he is not performing with Yes or travelling around the world conducting drum clinics, White spends time with his wife of over twenty years, Gigi, and their two children, Jesse (also a musician) and Cassi.

Alan White had guested with local Seattle band MerKaBa on a number of occasions and Alan White and MerKaBa also had links with another local band, Treason. In 2003, Alan White joined sessions for a new MerKaBa album, but these evolved into a new band, called White, and an album's worth of demo recordings under the name Loyal. As well as Alan, the band consisted of Kevin Currie (from MerKaBa; lead vocals), Karl Haug (from Treason; electric & acoustic guitars, lap steel), Steve Boyce (from MerKaBa; bass, guitar, backing vocals) and Ted Stockwell (from Treason and MerKaBa; keys, guitar). Stockwell left the band and, in April 2005, was replaced by Alan's former colleague in Yes, keyboardist Geoff Downes. A new album, White, was recorded, partly based on the Loyal demos. The album was released in 2006, with a cover by Roger Dean.

The band has played live (with various keyboardists) in the Seattle area. They were due to join the abortive More Drama Tour. The More Drama Tour, scheduled to begin in North America in August 2005, was to have seen three acts, The Syn, White and Steve Howe touring together, with Chris Squire, Steve Howe, Alan White and Geoff Downes playing Yes material at the end of the evening (with Kevin Currie handling lead vocals). However, the tour was cancelled shortly before it was due to begin. Alan White later joined The Syn touring band for dates in the first half of 2006.

Recently, Alan White has been working on projects with Billy Sherwood, notably a new band, Circa:, with a third Yes alumnus, Tony Kaye.