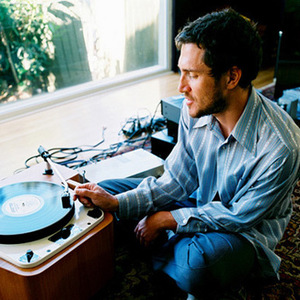 John Anthony Frusciante (born in New York on March 5th 1970) though probably best known for his time as guitarist of the Red Hot Chili Peppers, is a respected, acclaimed and prolific solo artist in his own right. Joining the Chili Peppers in 1988 after the death of Hillel Slovak, the band's original guitarist, Frusciante was featured on both Mother's Milk and Blood Sugar Sex Magik. However, John's rise was short lived.

On May 7th, 1992, John quit the band just before the Chili Peppers were due on stage. (He did however play the show). His departure was considered a result of dissatisfaction with the level of rapid fame the band was achieving, as well as heavy fatigue from touring.

In 1994, John released Niandra Lades & Usually Just A T-Shirt, his first solo album. Some of the material had already been recorded whilst he was on tour. Many fans consider this album to be his best solo album which included many bizarre and aptly named songs such as "My Smile is a Rifle" and "Running Away Into You".

After his departure from the Chili Peppers, John slipped further into the world of drugs. In 1997, his second solo album, Smile From The Streets You Hold, was released. According to Frusciante, this album was released solely to raise money for his drug habit. It was later withdrawn from sale in 1999. He would later state on multiple occasions that 1997 was the worst year of his life.

John's heavy drug usage had brought him close to death on multiple occasions. It was with suggestion from his band mate Flea, who kept contact with John still, that he checked himself into rehab to overcome his habits. In 1998, he was asked to re-join the Red Hot Chili Peppers. He said yes, and in 1999, Californication was released with John back on guitar. His reappearance in the public eye was greeted with some shock, as there were many tales of his terrible descent into addiction, but it was clear to everyone who listened to Californication that Frusciante was truly back. The album, featuring the guitar skills of Frusciante, was a sonic celebration of life and rebirth ("Scar Tissue"), and also an exploration of Hollywood superficiality ("Californication").

Over the time spent touring and recording Californication, John created a set of his own songs that would come forth on his next solo album, To Record Only Water for Ten Days. Retaining his lyrical style, John pursued a different direction, and spewed a heavily synthesized album.

From the Sounds Inside was an internet-only release that made its debut on his official website. The album, which stretches over 21 songs, is comprised mainly of unfinished and unmastered demos from his Record Only Water era.

The highly anticipated follow-up to Californication, which was to be titled By The Way, was released in 2002. By The Way was applauded by critics as a departure from the band's previous styles, and is recognized for the melodic and subdued emotions given by the Chili Peppers. Frusciante is credited with writing most of the album's melodies, bass lines, and guitar progressions, therefore changing the direction of the recording dramatically: "his warm, understated guitar work and his doo-wop style vocal harmonies are king this time around." Frusciante has stated that writing "By the Way [was] one of the happiest times in my life."

During the tour break of By The Way, Frusciante proceeded to record seven solo albums in as little time as it took to create By The Way. In February 2004 John released the positively-received Shadows Collide With People. A well-produced and orchestrated album, it pulled together the will power and the resolve that John held after his struggle with drugs and mental illness, and features band mates Flea and Chad Smith on several tracks. In May of that year, rumors circulated that another album would be soon released. Indeed it was, as John planned to release a total of six albums in six months through the Record Collection label.

The first album appeared at the end of June 2004. Named The Will to Death, it lacked the studio mixing and sharpness of Shadows Collide. Instead, it was a raw and unedited release that still retained a high quality. It also exemplified John's love of imperfection.

The second in the series would be titled Automatic Writing. Composed mainly of extended jams, it was not to be released under John's name but instead that of Ataxia. The project featured John Frusciante on guitar, Josh Klinghoffer on drums and Joe Lally on bass (Fugazi). The album was released in late August of 2004 and featured all three band members on vocals.

His next solo album to be released was the DC EP. On this production, Frusciante was accompanied by Jerry Busher on drums. Musically, the songs were very similar to the Will to Death, but were different in tone and genre. With this album John worked with yet another former member of the DC Hardcore band Fugazi. Lead guitarist, and vocalist for Fugazi, Ian Mackaye helped John record and master the album at Ian's Dischord Records studio in Washington DC. Mackaye even loaned Frusciante his guitar and amps to record on. Frusciante remarked that he was relieved that he still sounded like himself even on someone else's equipment. DC EP also marked the first album in five years that Frusciante had NOT used a synthesizer of any kind.

Two more solo albums on the Record Collection label would follow within the original six month time span, Inside of Emptiness (based around a rock sound, with synthesizers playing only a minor role throughout) and A Sphere in the Heart of Silence (composed mainly of electronica-based material). Both of these albums done in collaboration with Josh Klinghoffer. In 2005, the last in the planned-six album series was released. Curtains (an album comprised of mostly acoustic guitar).

2006 brought the release of Stadium Arcadium, the Chili Peppers' ninth studio album and so far only double album. The album was praised for integrating musical styles from several aspects of the band's career and won the band seven Grammy Award nominations in 2007 including an award for Best Rock Album.

Frusciante has also found time in between dates on touring and producing solo albums to finalize and produce the remainder of the much-anticipated Ataxia sessions with Joe Lally and Josh Klinghoffer. Automatic Writing II was released in 2007. Shortly after, the group disbanded.

On January 20, 2009, John released his latest solo album, The Empyrean. Josh Klinghoffer was of course there to help as well as an array of other musicians including Johnny Marr, formerly of The Smiths and Modest Mouse, and his Chili Pepper band mate, Flea.

In December 2009, John announced he was departing the Red Hot Chili Peppers for a second time. Writing on his blog, he stated:

"When I quit the band, over a year ago, we were on an indefinite hiatus. There was no drama or anger involved, and the other guys were very understanding. They are supportive of my doing whatever makes me happy and that goes both ways.

To put it simply, my musical interests have led me in a different direction. Upon rejoining, and throughout my time in the band, I was very excited about exploring the musical possibilities inherent in a rock band, and doing so with those people in particular. A couple of years ago, I began to feel that same excitement again, but this time it was about making a different kind of music, alone, and being my own engineer.

I really love the band and what we did. I understand and value that my work with them means a lot to many people, but I have to follow my interests. For me, art has never been something done out of a sense of duty. It is something I do because it is really fun, exciting, and interesting. Over the last 12 years, I have changed, as a person and artist, to such a degree that to do further work along the lines I did with the band would be to go against my own nature. There was no choice involved in this decision. I simply have to be what I am, and have to do what I must do.

Sending love and gratitude to you all."