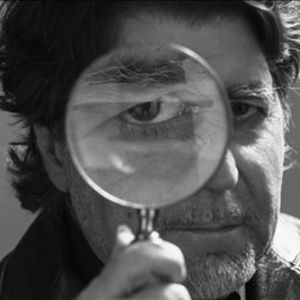 Joaqu?n Ram?n Mart?nez Sabina (?beda, Spain, 12 February 1949), known artistically as Joaqu?n Sabina, is a singer, songwriter, and poet. He has released fourteen studio albums, two live albums, and three compilation albums. He has collaborated and composed songs for Ana Bel?n and Miguel R?os amongst others. Sabina's first album, Inventario (Inventory) was released in 1978 by a small label Movieplay.

Sabina's first album, Inventario (Inventory) was released in 1978 by a small label Movieplay. He describes this album "as his own version of death metal", but the album largely went unnoticed. Afterwards, he moved to the powerful CBS (today Sony) and released Malas compa??as (Bad Companies). This album gave Sabina his first number-one hit single "Pongamos que hablo de Madrid" (Let's say I?m talking about Madrid), and the artist attained wide recognition. He released a live album called La mandr?gora (The Mandrake), sharing the spotlight with bandmates Javier Krahe and Alberto P?rez. The trio enjoyed much popularity due to their participation in a TV program. La Mandr?gora created much controversy due to the racy content of the lyrics.

Sabina released his third album Ruleta Rusa (Russian Roulette) in 1983 and two years later, Juez y parte (Judge and Side). His political views led him to take part in the anti-NATO movement. He later released Joaqu?n Sabina y Viceversa en directo, his first live album, recorded in the Salamanca theatre in Madrid. In this album, the singer collaborates with other singers such as Javier Krahe, Javier Gurruchaga, and Luis Eduardo Aute.

In 1987 he released Hotel, dulce hotel (Hotel, Sweet Hotel), which sold a large number of records in Spain. That success followed with his next album El hombre del traje gris (The Man in The Gray Suit), and followed with a successful tour of South America. This was followed by the released Mentiras piadosas (White Lies) in 1990, and two years later F?sica y qu?mica (Chemistry and Physics), which led to another successful tour of the Americas.

After recovering from a stroke, he returned to the stage in 2002 with D?melo en la calle (Dare to Say That Outside). He later released a double album called Diario de un peat?n (A Pedestrian's Diary), which included both his previous album and 12 new songs, along with a book illustrated by him.

In 2005 Sabina's released a new record Alivio de luto (Mourning Relief). The album release was accompanied by a DVD that includes interviews, music videos, acoustic versions of the songs, and home-made recordings.

In 2007, he went on tour with Spanish singer Joan Manuel Serrat, called Dos P?jaros de un Tiro (Two birds with one stone) and they recorded a CD of this tour, which includes the DVD of the concert and a documentary.