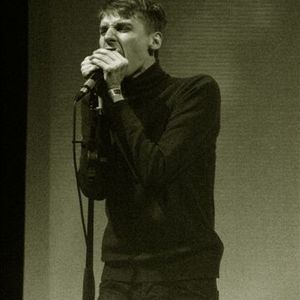 Power electronics / death industrial band from Sweden consisting of Erik Jarl and Martin Bladh. Martin Bladh and Erik Jarl had already known eachother for a few years when they began their mission as IRM in 1997. Fuelled by the rage of sonic power-houses like Whitehouse and Brighter Death Now, they recorded a demo tape that landed them a deal with Cold Meat Industry. Immediately upon its arrival, ?The Red Album? was met by great enthusiasm as it breathed new life into a genre gone quite stagnant at the time.

The sound displayed a unique amalgamation of Jarl's analogue bass-heavy eruptions, and Bladh's revelatory lyrics / vocals which were thematically more aligned with the apocalyptic preachings of Michael Gira than the confrontationalism of William Bennett.
Also the monochrome cover designs that IRM chose to work with stood in stark contrast to the cheap shock tactics that had infested the power electronics scene for so long. On subsequent landmark albums such as "Oedipus Dethroned" and "Virgin Mind" IRM honed their sound and dug deeper into the maze of the human psyche, while in parallell both Bladh and Jarl have explored new aestetic avenues with diverse solo projects. More than ten years down the road, the adolescent debutants have become the revered minstrels of industrial gospel. This time Martin Bladh and Erik Jarl are joined by a third band member Mikael Oretoft on bass-guitar at album "Order4". This new work by IRM is a deeper delving into the psyche of the self inflictor ? the core of inner regions violently exposed.
Comprised by four tracks, each exactly 15 minutes in length we are thrown into a vortex of feedback, cymbaldrones, heavy bass-strumming, nightmarish pianotinkles and irreproachable synthwork.
Demanding your attention all the way through ? certainly not an easy listening experience ? describing the course of events is impossible. It is again a mature and intricate work of incisive delicacies and theatrical ambiences.
The sense of detail throughout is immense and the editing perfect.
The clinical heaviness of earlier works are now transformed into a pure harsh, static soundwave which are most often cut off by another, slower, softer but in ways a more painful and dynamic one.
The lyrics here are deeper cuts into personal matters.
A man altering between life and death - a calculating and disillusive thinker and recluse who has lost the grip of reality, or perhaps found another?
The strife for self-control turned into sick dedication, waging war on himself to receive recognition ? the end comes nearer.
Seldom have we heard a strange work like this which turns both lyrics and music into a full whole ? stay away if deeper encounters with the human mind offends.

The creative artwork was made by the renouned Swedish artist Stefan Danielsson, who also made the frontcover artwork for Whitehouse album "Racket".

An Act Of Self Mutilation Is An Act Of Freedom (CDr, MiniAlbum) Annihilvs 2003

Oedipus Dethroned / An Act Of Self Mutilation Is An Act Of Freedom (2xCD, Album, RE + Box, Comp, Ltd) Autarkeia 2011