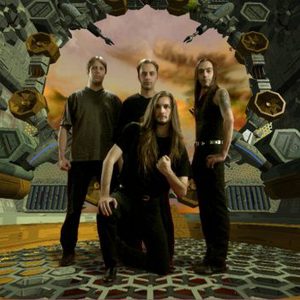 Turin Power Metal act formulated in 1995 by vocalist / guitarist Alessio Perardi. Apparently the man's conversion to Heavy Metal, he had previously been treading the boards as part of a DIRE STRAITS cover band, came when a friend gave him a GAMMA RAY album to listen to in 1994. Duly bowled over Perardi set about constructing his own Metal group, pulling in former AMPLIFY bassist Alberto Leschi as the first recruit and guitar virtuoso Roberto Capucchio.

Signing to the German Remedy label AIRBORN, pulled in IRON SAVIOR's Piet Sielck to produce the "Against The World" album and a year later the prog-influenced "D-Generation"

In the following years many changes happened, Airborn released their third album "Legend Of Madog" as an indie album with a new line up: drummer Tony Serra was fired, due to personal problems and Alberto Leschi amicably left to concentrate on his firm. Unfortunately Alberto died of leukaemia some years later.

In 2012 to celebrate the 10th anniversary of "Against The World" debut album a "Demos & Rarities Collection" is released with rare material spanning all Airborn career.

Lizard Secrets: Part One - Land Of The Living