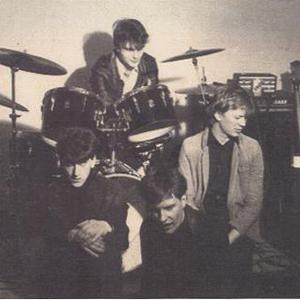 Switching to the moniker of Hurrah!, the quartet signed to the new Kitchenware Records label in 1982. Mark Sim soon departed to be replaced by Damien Mahoney, whereupon a series of acclaimed singles such as 'The Sun Shines Here' and 'Hip Hip' earned the band great respect from the British Independent sector. Based upon the pivotal force of the singing/guitar-playing/songwriting partnership of Paul Handyside and David Hughes, Hurrah! mastered a jittery, urgent style rich in melodic content.

By 1986, however, the band had pushed their sound towards a rockier terrain, replacing the initial charm with power and passion. Damien Mahoney left to join the police force in the spring of that year, allowing Steve Price to fill the vacant drum stool. Their debut, 'Tell God I'm Here', saw the light of day in 1987, swiftly followed by a support date with U2 at London's Wembley stadium and, on a more bizarre note, live shows in Iraq, Egypt and Jordan after accepting an invitation from the British Council. In spite of the band's determination, commercial success remained elusive.

When 'The Beautiful' failed to have a significant impact on the marketplace Hurrah! parted company with the 'misunderstanding' Arista Records label and returned to the independent sector. Adrian Evans (b. 6 March 1963, County Durham, England) became the band's fourth drummer when Steve Price emigrated to America, but by then the band were in their death throes.
(Source : The Guinness Encyclopedia of Indie & New Wave Music )

They recorded '3rd' album in 1991 after 'The Beautiful' but it is not released yet. The songs on it might be - Kiss The Starlight / What I Need / Sugar Head / Book Of Love / That Dream's Over Now / I've Never Found Truth / Keep This Thing Alive / Get It On / Bring The Curtain Down / Book Of Love (acoustic) .

Paul Handyside goes under the name of Bronze. Bronze have released their 1st single "Presence of Greatness" which includes two brilliant anthemic guitar-pop tunes, on Bus Stop Label, too. They also had another single "Let It Rain", and two albums "The Statue In The Stone" and "A Common Prayer".
Paul will soon release his solo album "Future's Dream" on 5the November.