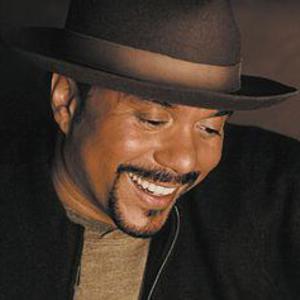 According to one Rolling Stone writer, Howard Hewett is the premier vocalist in the post - Marvin Gaye era of romantic pop. Like Gaye, Hewett soars to new heights and seduces his audience. It is no wonder he's responsible for selling some ten million records; his voice is irresistible. It's Time, Hewett's debut release for Caliber Records, is, according to the singer, "the first project molded out of my own mind. I'm in charge of the sound and comfortable with the feelings. Those feelings are all about romance. This is the first record that's completely me."

It's Time, Hewett's debut release for Caliber Records, is, according to the singer, "the first project molded out of my own mind. I'm in charge of the sound and comfortable with the feelings. Those feelings are all about romance. This is the first record that's completely me."

Hewett first burst on the scene as lead singer of Shalamar, the successful post - disco group which topped the charts in both the U.S. and U. K. "Second Time Around," featuring Howard, was a near two - million seller. "For the Lover in You," co-written by Hewett and reinterpreted in It's Time, was another major hit. "Dancing in the Sheets," "A Night to Remember" are just a few more of the Hewett - led smash hits that Shalamar enjoyed as a group.

In the mid-eighties, Howard's solo career rocketed. The first single released on his own, I'm For Real," zoomed to number one. A series of hits followed, such as "Stay," "I Commit to Love," "Strange Relationship," "Once, Twice, Three Times," and "Show Me."

What's more, his original "Say Amen" earned the status of a modern gospel classic, enjoying across the board airplay. And his recorded duets with Anita Baker, Dionne Warwick, Brenda Russell and Stacy Lattisaw won critical accolades.

"Of all the fine singers working today," artist/songwriter Babyface has said, "Howard Hewett is among the finest."

Born in Akron, Ohio, he led his older sisters in the Hewett Singers, a group who played the big-time gospel circuit while Howard was still a pre-teen.

"Spirituality," he says, "is at the heart of my music. Real romance is always spiritual."

The majority of songs on It's Time are Hewett originals. "How Do I Know I Love You?" co-written with long-time collaborator/producer Monty Seward, has the feeling of a time proven standard. And in the one instance when he interprets a motif made famous by another, Marvin Gaye's "Just To Keep You Satisfied," Howard proves himself more than capable of meeting the challenge.

"Just as I believe that I can't compromise romance," says Hewett "I can't compromise my music. I want songs like 'This Love's Forever,' 'On and On' and 'Your Body Needs Healing' to disclose secrets about myself and expose my heart.

"I want to be clear -- 'Crystal Clear' is the name of the song -- about how I need love. Ballads seem to express that need best. That's why I'm thrilled that It's Time is about ballads, ballads and more ballads."

Given the resurgence of romantic pop, It's Time is right on time, certain to gain Howard Hewett new affection and appreciation from an ever-widening audience hungry for great songs from a great singer.

The Very Best Of Howard Hewett

I Commit To Love