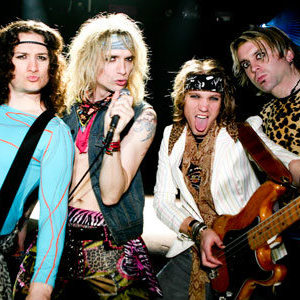 Hot Leg is an English glam metal band led by former The Darkness frontman Justin Hawkins. The band consists of Hawkins, Pete Rinaldi (of Anchorhead), Samuel SJ Stokes (formerly of The Thieves) and Darby Todd (from Protect The Beat). Their debut album Red light Fever was recorded in London in early 2008, and was released on 9 February 2009 by Barbecue Rock Records. Hot Leg released the song Heroes as a free download, but the track did not appear on their album, Red light Fever.

Hot Leg released the song Heroes as a free download, but the track did not appear on their album, Red light Fever. Appearing on their official MySpace profile was Hot Leg's debut single, titled Trojan Guitar, which was released digitally as a free download on 20 October 2008. It is described as a 'medieval epic' which lasts more than 5 minutes. A medley of other songs due to appear on Red light Fever was posted on the band's MySpace page, titled "Mega Mix 1". "Automatic" and "Cupboard Love" (additional tracks from the I've Met Jesus EP) were also posted. After the release of Red light Fever, tracks from the album were uploaded.

Hot Leg conducted their first full tour of the United Kingdom in October 2008. During this tour, notably the band's Edinburgh date, Hawkins mentioned the band had a Christmas single entitled I've Met Jesus, an unlikely contender for the UK Christmas number-one. Via their myspace blog on 21 December 2008, the Leg announced that I've Met Jesus had hit the Christmas number one slot in the 'Man-Rock' Charts.

In November, Hot Leg toured the UK in support of Alter Bridge but pulled out of three dates giving Hawkin's throat infection as the reason. However, there was controversy at the Glasgow and London stages of the tour, when Hot Leg were booed by Alter Bridge and Logan fans. Hot Leg also toured in November with Extreme. Hawkins and Rinaldi guested with Extreme on the final date in London, singing a medley of Queen songs.

Also in November Hot Leg made a guest appearance on a Sky One programme called Guinness World Records Smashed, aired on 27 November 2008. During the show they smashed the world record for the highest number of people playing air guitar all at the same time.

In late February 2009, their song Take Take Take became available for download from their website, but did not feature on their debut album.

In late 2010 it was announced that Hot Leg were on hiatus along with Stone Gods which lead to rumours of there been a possible The Darkness reunion in 2011., which were confirmed on March 15 by an announcement on a new The Darkness website. Because of this the future of Hot Leg is unclear.