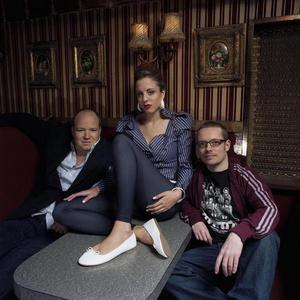 The Herbaliser are all about moving forwards, onwards and upwards. Bonding over a shared love of jazz, funk, rare groove and hip-hop in the early 1990s, West London duo Jake Wherry and Ollie Teeba have evolved with each chapter in their 15-year story. First it was instrumental beats, breaks and samples. Then they added guest rappers and vocalists. Later, as international festival favourites, their line-up swelled into a mini-orchestra with lush arrangements to match.

On their latest album, Same As It Never Was, The Herbaliser hit a dazzling new peak. With a new label, a new main vocalist, and a new focus on soulful songwriting, this is their richest and most diverse record so far. A timeless modern soul record, it should appeal not just to specialist fans but also to a new generation seduced by the knowing pop-soul nostalgia of Amy Winehouse or Mark Ronson. Glossy and gritty, organic and eclectic, Same As It Never Was builds on the band's hip-hop roots with jazz, funk, R&B, pop and instrumental soundtrack influences.

?It's still a hip-hop inspired record, but at the same time it's a lot broader because our musical and emotional horizons are broader,? says Jake. ?As teenagers in the 1980s, we were into rare groove and hip-hop and early electro and funk and soul and jazz. It's a big melting pot.?

On Same As It Never Was, for the first time, The Herbaliser have brought a single main vocalist into the band line-up. One listen to the show-stopping, roof-raising talents of 22-year-old Londoner Jessica Darling will explain why. Hers is one of those timeless voices that can floor you in any era, 40 years ago or yesterday.

Same As It Never Was also marks a more collaborative approach to the band's music. Jake and Ollie remain the musical nucleus, but they have opened up the songwriting to Jessica, plus their regular Easy Access Orchestra collaborators Ralph Lamb and Andy Ross. All five are now permanent Herbaliser members. The legendary bass guitarist Pino Palladino, a personal hero of the band, whose unrivalled career includes guesting with everyone from De La Soul to Erykah Badu to The Who, also plays on four tracks ?The key difference is having a single vocalist," says Jake. ?Ollie and I still produce and oversee it, but Ralph and Andy and Jessica have been a lot more involved in this record. We've learned to integrate the musicians in the studio much more than we ever did in our first few albums.?

Same As It Never Was hits the ground running with the brassy title track, a rolling-thunder hip-hop party groove that starts off huge and just gets bigger. It's an instant, life-affirming anthem designed for blazing sunny days and street carnivals. A knockout opener.

With the stage set, Jessica arrives with a bang. From the juicy funk-pop blast of On Your Knees to the joyous diva-in-love testifying of Can't Help This Feeling and the revved-up R&B gallop of Clap Your Hands, The Herbaliser's new singer brings a dash of soul-queen class to the mix. ?We've always had one foot back in the 1960s and 1970s,? Herbaliser admit. ?But at the same time we pay a lot of attention to making the beats hard and clubby, mixing R&B and hip hop in that DJ Premier or Tribe Called Quest vein.?

Although Same As It Never Was may be their most song-driven album to date, the band have not overlooked their long tradition of showcasing talented rappers from both sides of the Atlantic. Previous albums have featured guest slots by Roots Manuva, Blade, Phi Life Cypher and MF Doom. On this album, their latest discoveries include London-based Yungun Aka Essa on the relentless, dynamic, steam-powered funk locomotive Just Won't Stop. ?We've been able to work with really good rappers from around the world,? Herbaliser say. ?While it's always good to have a hot young MC from the States, it's also important to represent the UK. Yungun was our choice for this record.?

Jazzy instrumentals also remain a Herbaliser forte. Their love for the lush cinematic soundscapes of John Barry, David Axelrod and Quincy Jones still informs the opulent grooves of The Next Spot, the playfully cheeky party stomper Amores Bongo and the broody, jazz-noir prowl of Blackwater Drive. This is deluxe easy, and uneasy, listening. Same As It Never Was reaches an epic climax with the gorgeously sensual final track, Stranded On Earth. The natural successor to long-time Herbaliser favourite Moon Sequence, this astral jazz-soul symphony features a stunning vocal performance by Jessica that nods to vintage 1970s Pink Floyd. ?We were going to call it Dark Side of the Moon Sequence,? laughs Jake. ?Pink Floyd's The Great Gig In The Sky is definitely a reference point. It's one of my favourite songs on the album. It starts off nodding back to late 1990s Herbaliser, but the stuff that Jess did just takes it to another level.?

Indeed, the whole of Same As It Never Was takes The Herbaliser to a higher level. Their musical voyage of discovery continues. Forwards, onwards and upwards. (Stephen Dalton)

There Were Seven: Remixes

Same As It Never Was