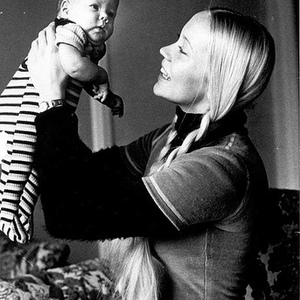 Agnetha F?ltskog is a Swedish singer best known for her participation in the best-selling group, ABBA. She has had a long and fruitful solo career, as well as recording duets with artists such as Peter Cetera, Tomas Ledin and Ola H&aring;kansson. Agnetha was born in 1950 in J?nk?ping, Sweden. She began her singing career around 1967 as lead singer for the Bernt Enghardt band, a typical 1960s swedish dance band.

Agnetha was born in 1950 in J?nk?ping, Sweden. She began her singing career around 1967 as lead singer for the Bernt Enghardt band, a typical 1960s swedish dance band. In 1968, she signed a contract as a solo artist and released her first album, Agnetha F&auml;ltskog. It was a significant hit, as were the follow-ups, Agnetha F&auml;ltskog Vol. 2 (1969) and Som jag &auml;r (1970). By this time, Agnetha was established as a major recording star in Sweden.

In 1969, Agnetha had become romantically involved with Bj&ouml;rn Ulvaeus. Bj?rn was at that time working with fellow songwriter/producer Benny Andersson on a series of projects. One such project was an occasional singing group, Festfolket, comprising of Agnetha, Bj?rn, Benny and Benny's girlfriend, Anni-Frid Lyngstad (who also recorded as Frida).

During this time, Agnetha's solo career continued with more successes, including taking the role of Mary Magdalene in the Swedish stage version of Jesus Christ Superstar. In 1970, the two couples scored a significant hit, "Hej, gamle man", although it was credited as Benny & Bj&ouml;rn. In 1971, Agnetha released her final "pre-ABBA" album, N&auml;r En Vacker Tanke Blir En S&aring;ng.

In 1973 with the release of their second album, the group was oficially renamed ABBA and would go on to dominate music charts for the next decade. Agnetha released one solo album during this period, Elva Kvinnor I Ett Hus (1975). As ABBA began to wind down, she released an album of Christmas songs with her daughter entitled Nu t&auml;ndas tusen juleljus in 1981.

Her first recording following her divorce from Bjorn (as well as the breakup of ABBA) was her first English solo album, Wrap Your Arms Around Me in 1983, followed by Eyes Of A Woman in 1985.

She released two albums in 1987, the Swedish collection of children's songs Kom f&ouml;lj med i v&aring;r karusell, recorded with her young son and the English-language I Stand Alone. This would be her final studio album for seventeen years.

In 2004, Agnetha returned to the public eye with both a compilation of her early work, The First Years 1967-1979 and a new English-language album, My Colouring Book. The singles "If I Thought You'd Ever Change Your Mind" and "When You Walk In The Room" became big hits.

In the years since, her public profile has increased, even hinting at the possibility of an ABBA reunion some time in the future.