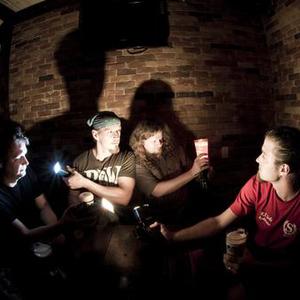 Gwynbleidd began in 2002 as a two-man project melding all the prime qualities of black, death and folk metal. By 2004, Michal (guitars, clean vocals) and Maciej (rhythm guitars, bass, growls) had written more than an album's worth of dark, melodic, aggressive yet melancholic material. When Adam (drums) joined the fold, the band recorded a four song demo/EP intended to showcase Gwynbleidd's eclectic, progressive music.

What begun as an idea for a demo, became the band's "Amaranthine" EP, self released in 2006. The disc has proven a worthy opener to Gwynbleidd's discography. Within two months of seeing the light of day, the debut was picked up by The End Records for its mailorder distribution.

The band later enlisted Jakub to fill all live bass duties and were finally ready to hit the stage. In 2006, the four-piece performed live numerous times, always attracting a healthy turnout of fans and friends alike. It was the beginning of 2007, however , that marked the band's most notable live events to day. Gwynbleidd performed at the amazing Heathen Crusade Festival ( Minnesota), as well as during the Ballet Deviare Company live productions.