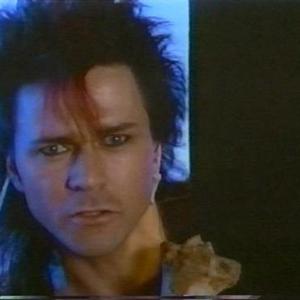 Lawrence Gowan is a Canadian musician, born in Glasgow, Scotland on November 22, 1956. Gowan was a solo artist for over fifteen years prior to becoming the keyboardist and vocalist for Styx. His musical style is often classified in the category of progressive rock, as well as singer-songwriter Pop. His career: At the age of nineteen, he earned an ARCT in classical piano performance from the Royal Conservatory of Music, in Toronto. Upon graduation, he enjoyed modest local success with the band Rhinegold in 1976.

At the age of nineteen, he earned an ARCT in classical piano performance from the Royal Conservatory of Music, in Toronto. Upon graduation, he enjoyed modest local success with the band Rhinegold in 1976.

After Rhinegold broke up in 1981, Lawrence Gowan began a successful solo career under his surname, "Gowan", releasing his self titled debut on Columbia Records in 1982. This album Gowan contained his first singles "Victory" and "Keep Up The Fight". His 1985 album Strange Animal was his first real Canadian commercial breakthrough, spawning the hit singles "A Criminal Mind", "(You're A) Strange Animal" and "Cosmetics". The album was produced by David Tickle (Prince, Split Enz, Sting, U2 ) and featured Tony Levin (King Crimson, Peter Gabriel) on bass / Chapman stick, and Jerry Marotta (Peter Gabriel) on drums. His 1987 follow up Great Dirty World was also produced by Tickle and again featured Tony Levin on bass but had session percussionist Nigel Olsson (Elton John) on drums. This album's arrangements were assisted by Bob Ezrin (Alice Cooper, Pink Floyd, Peter Gabriel) and gave him another breaking hit single, "Moonlight Desires," which featured Jon Anderson (Yes) on backing vocals.

1990's Lost Brotherhood featured Rush's Alex Lifeson on guitar', however, it was a commercial disappointment, and Gowan elected to pursue a change in his musical direction. Taking a more subdued, acoustic approach, he released an adult contemporary album ...But You Can Call Me Larry in 1993, using his full name for the first time, and Lawrence Gowan returned to the Canadian charts with three strong singles: "When There's Time For Love", "Soul's Road", and "Dancing On My Own Ground". Gowan subsequently released critically acclaimed The Good Catches Up in 1995, which was produced by Eddie Schwartz (The Doobie Brothers, Paul Carrack), but the album did not generate singles or radio airplay. In 1997, Gowan released two live CDs: Sololive - No Kilt Tonight containing a strong rendition of Ragtime's classic "King Chanteclerc Rag", and Au Qu&eacute;bec with an evocative cover of Harmonium's "Pour Un Instant", as well as his first French song, "St?phanie", which was dedicated to his supportive Quebec fan base.

In 1997, Gowan released "Healing Waters" as a tribute to Diana, Princess of Wales after her death. However, despite what many believe, this song was not originally written for this purpose. It was, in fact, used in its original form in the 1995 soundtrack for the movie 'When The Bullet Hits The Bone' (starring Jeff Wincott), which was two years prior to the infamous accident that killed Diana. Although this song is not actually listed in the movie's credits, it plays a significant role within the film. After the Princess' death, the lyrics were modified by Gowan into the version that fans have come to know.

Gowan's classic "A Criminal Mind" was covered in 2005 by Canadian hip-hop artist Maestro; and Gowan appears in the song's video with his vocals sampled on the recording.

In February 2006, Lawrence Gowan did four orchestra accompanied concerts in London, Ontario and Kitchener, Ontario. On March 23rd, 2010, The Return of the Strange Animal was released by Linus Entertainment featuring remastered versions of the original recordings packaged alongside a documentary on the making of his breakthrough CD at Tittenhurst Park with Peter Gabriel's band mates. The disc features some of the original demo recordings, two new songs, and full resolution videos, including an animated cartoon entitled "The Checkmate: Ominous Spiritus 2010". The disc closes with a Live recording of "Criminal Mind" featuring his current band, Styx.

Gowan has guest-starred on the Canadian animated comedy series Chilly Beach, and he has also displayed a passionate love for ice hockey by playing for The Rock & Roll All-Stars, a celebrity team that participates in charity events across Canada.

Return Of The Strange Animal

The Good Catches Up

...But You Can Call Me Larry