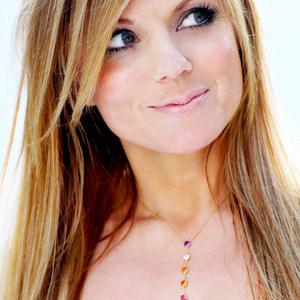 Geraldine Estelle "Geri" Halliwell (born 6th August, 1972 in Watford, Hertfordshire, England, United Kingdom) is an English pop singer-songwriter, television personality, writer, actress and UNICEF ambassador. In early 90's she was the hostess of a Turkish game show Se? Bakal?m (Let's Make A Deal). She became famous in the late 1990s (under the nickname of "Ginger Spice") as a member of the girl group the Spice Girls.

As a part of the Spice Girls, Geri released two studio albums, Spice (1996) and Spiceworld (1997) (sales combined are around thirty-five million), a box-office hit film, Spiceworld:The Movie (1997), and performed with the group on the early leg of The Spiceworld Tour (1998).

On May 30, 1998, just before the end of the European tour, Halliwell left the Spice Girls to pursue a solo career. The first official confirmation was an announcement to the media by her solicitor on 31st May.

In 1999, Halliwell released her debut solo album Schizophonic, with lead single "Look at Me". The single reached number two in the UK, going on to sell over 1 million copies worldwide. Further singles from the album, "Mi Chico Latino" and "Lift Me Up", became UK number ones with the latter outselling Halliwell's former bandmate Emma Bunton. The fourth single, "Bag It Up", also reached number one.

In 2001 Halliwell followed up with her second album, Scream If You Wanna Go Faster. It also included her cover version of the Weather Girls' 1983 hit, "It's Raining Men", used on the Bridget Jones's Diary film soundtrack. The song became a huge hit, selling over 4 million copies worldwide, in the United World Chart it hit number two (behind "Lady Marmalade" by Christina Aguilera, Lil' Kim, Mya & Pink) based on Sales, Airplay and Votes, it became the second best selling single of 2001. The follow-up singles were "Scream If You Wanna Go Faster" (number eight) and "Calling" (number seven).

In late 2004, Halliwell made a return to music with the single "Ride It", which reached no. 4 on the UK charts and no. 1 on the dance charts. This was the first single from her third album, Passion, which was at that stage slated for a spring release after a second single. Eventually a new single, "Desire", was released on May 30, 2005. After the release of Passion she stated that she had no plans to continue with her solo singing career.

On April 12, 2007, it was announced that Halliwell had signed a six book deal with Macmillan Children's Books. The books are set to feature nine year old Ugenia Lavender, Halliwell's own creation. In the stories, Ugenia will be accompanied by characters loosely based on Halliwell's celebrity friends, including Victoria Beckham and Gordon Ramsey. The books are scheduled to be released in May, 2008.

On June 28, 2007, Halliwell announced she was joining her former colleagues for "The Return of the Spice Girls", a global tour that would see all five original members of the Spice Girls together on stage for the first time since Halliwell walked out mid-tour in 1998. Part of the setlist of the reunion tour features Halliwell performing solo, singing her hit single 'It's Raining Men'. On 1 February 2008, it was announced that due to personal and family commitments their tour would come to an end in Toronto on 26 February 2008, meaning that tour dates in Beijing, Hong Kong, Shanghai, Sydney, Cape Town and Buenos Aires were cancelled.

In 2010, Halliwell, announced through her official website she was back in the studio and recording.

Scream If You Wanna Go Faster