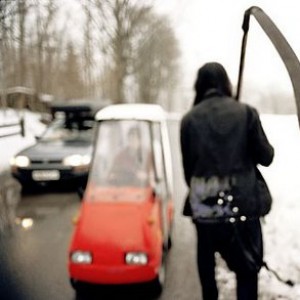 FURZE is created out of the dust of WOE J REAPER ? around 1996 partly the name for a project, periodically a band, then the driving force behind it eventually split it in '97 for the last time and finally started it seriously? In October 1998 Woe J Reaper changed the name to FURZE, at the time when lyrics like "Scolopendraarise" and "Devacamo Possessed Black" were written ? and Reaper had moved out in the half desolate forest (where he spent 3 ? years) to aid the inspiration force further?

FURZE/WOE J REAPER released 3 demos in the last years of the 90s and signed a deal with Norwegian Apocalyptic Empire in 1999. They released the 4 first releases including the 2 first albums TRIDENT AUTOCRAT and NECROMANZEE COGENT. Released in a time when little originality was happening in the Black/old school metal fields ? FURZE is probably Norway's (or the underground in general) most influential music to arrive in 1999/2000, speaking about Black Metal newcomers. Their choice of label has both gained and held back? In 2001 the label boss was put in jail for robbing a post office and the then finished recorded 2nd album was very delayed. Also AER thanked "no" to expand their distribution net ? a question which came about very much due to the Furze records ? they were always the only CD-formats available from their catalogue, to this day. The original Furzement has been recognised and more so now as the band has signed a 5 deal album with Candlelight Records and are ready to take new steps in the time to come. A lot will happen in the coming years with FURZE. First thing up is the 3rd album (which even includes the mighty Frost as session drummer on 2 songs) and the re-release of the old albums ? licensed to Candlelight.

Live and other activities will be among the upcoming things the fans can experience ? it is time for the World to know there is only one Reaper, His name is Woe J Reaper, his scythe unveiled has a blade, a sound; named FURZE?.

FURZE don't sing ABOUT death and want to die?.we are all doomed?we are supposed to:

FURZE's "UTD", the Third and so far strongest of the Storms coming your way, is made outta opposite forces?This split-album with'em selves having being recorded June 2004 ? October 2005, bears the title "UTD: The Wealth of the Penetration in the Abstract Paradigmas of Satan"/
UTD: Beneath the Odd-Edge Sounds to the Twilight Contract of the Black Fascist"?

FURZE do not accept that other souls who play music (from Wet Wet Wet to Vivaldi to Black Sabbath) would claim to convey the actual musical furthering of The One Reaper .
They do all only sing about Death?