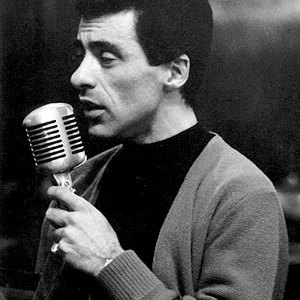 Frankie Valli (born 3 May 1934 in the Italian First Ward of Newark, New Jersey, USA as Francis Stephen Castelluccio) is best known as lead singer of The Four Seasons, one of the biggest music acts of the 1960s, which continued from then to the 1970s disco scene to the present day. Valli scored over 25 Top-40 hits with The Four Seasons, a handful of Top-40 hits dubbed as a solo act in the late 1960s, one dubbed as The Wonder Who? in 1965, and again in the mid to late 1970s. His best known "solo" single is Can't Take My Eyes Off You.

Valli started his singing career in 1952. He cut his first single in 1953 as "Frankie Valley," a name he adopted from Jean Valley, his favorite female singer. In the mid-1950s he split up with the Travellers and joined The Variety Trio, which consisted of Tommy DeVito, twin brother Nick, and Hank Majewski. They redubbed themselves the Variatones, and later, "The Four Lovers" and had a top 40 hit with "Apple of My Eye" in 1956. After a few more name changes, the group was renamed "The Four Seasons" in 1960. About the same time, Valli Italianized his name to its current form. Nick DeVito and Majewski left the group in 1960 or 1961 and were replaced by Bob Gaudio and Nick Massi. As the lead singer of the Four Seasons, he had a string of hits beginning with a #1 hit "Sherry" in 1962. Valli has been the lead singer from then until the present time, occasionally releasing singles under his own name, notably,"My Eyes Adore You" and "Swear To God"both number #1 and the theme song from the film version of Grease, written by Barry Gibb, which was a #1 hit. In 1978.Mid-70's also saw Valli releasing another number one hit under the "Four Seasons" titled "December 1963" ( "Oh, What a Night"). Valli covered the Beatles song "A Day in the Life" for the ephemeral musical documentary All This and World War II.

Valli is best remembered for his falsetto vocals, once prompting comedian Jackie Mason, referring to Walk Like A Man, to exclaim, "Sing like a man, Frankie!" Another singer who has been compared with Valli is Lou Christie.

He has made several appearances on the hit series Miami Vice and The Sopranos as New York mob captain Rusty Millio. Valli himself was referenced earlier in the series. In the Season Four episode, "Christopher," the owner of a Native American casino offers Tony Soprano his help in getting a local Indian organization to drop its planned anti-Columbus Day demonstration. In exchange, Tony is asked to get Frankie Valli to agree to perform at the casino.

John Lloyd Young won the 2006 Tony Award for Best Leading Actor in a Musical for his portrayal of Valli in the musical Jersey Boys. After the great success of the musical on Broadway, it has been reported that Valli is excited at the prospects for bringing the show to Las Vegas.Vallie currently tours with four cast members of original productions of "Jersy Boys" as his back-up singers.

A Touch Of Jazz