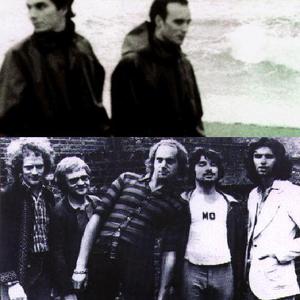 1) Family was a Spanish indie band active 1991-1993 formed by Javier Aramburu and I?aki Gametxogoikoetxea. They released just one album in 1993 titled Un soplo en el coraz?n," a tribute to the film by Louis Malle. In 2003 Spanish magazine Rockdelux released an album with the same songs played by other Spanish bands to celebrate 10 years from probably one of the best Spanish albums of 90's.

2) Family was British rock band from Leicester, England, active 1967-1973. Their music has been described as Blues-Rock, Prog-Rock, Art Rock and Psychedelia.

Family's debut single "Scene Through The Eye Of A Lens/Gypsy Woman" was released by Liberty in the autumn of 1967. While the single received praise from critics, it received very little airplay, due to its rather complex, uncommercial nature. Family's debut album, Music in a Doll's House, was released in July 1968 and it was produced by Traffic's Dave Mason and Jimmy Miller on a 4-track machine at Olympic Studios, London. The band's line-up: Roger Chapman (vocals/harmonica/tenor saxophone), Charlie Whitney (guitars/vocals), Rick Grech (bass/violin/cello/vocals), Rob Townsend (drums/percussion), and Jim King saxophone/flute/harmonica/vocals). Bandleader Tubby Hayes and his brass section played on "Old Songs New Songs". An extraordinarily ambitious album, 'Music In A Doll's House' marked an audacious beginning of what was a rather mixed career for Family. Many of the sounds conjured up in the studio had never been heard before - more incredible given that the album was created on a 4-track. The band's ability clearly transcended the available technology. Chapman's unusual vibrating delivery did not appeal to everyone, but it's a remarkable voice all the same. The musicianship and the unusual arrangements on this album found favour with fans who regarded it as a rather surreal musical feast. Music In A Doll's House is a truly innovative album and years ahead of it's time. The album charted respectably in the UK (reaching No. 35 in the UK album charts) and received considerable airplay from well-known British radio personality John Peel. It did not chart in the US. Interestingly, Mike Batt got his first big break in record production on this album by arranging "Mellowing Grey".

Family's 1969 follow-up, Family Entertainment, toned down the psychedelics of their previous offering, and featured their first UK hit "The Weaver's Answer." For the 1970 release A Song For Me, they developed a more aggressive sound, gaining them a larger European following. That year they played at several major rock festivals including the Isle Of Wight music festival and Holland's Kralingen Festival. Both of which were included in the documentary films Message To Love and Stomping Ground. The next release, Anyway, featured a side of a live performance of new material at Fairfield Hall in Croydon, England, as well as a side of new studio recordings.
The bar was raised in 1971 with Fearless, but the band's biggest success was yet to come, in 1972's Bandstand, featuring hits "Burlesque" and "My Friend the Sun". This was followed by the underrated but enjoyable It's Only a Movie, where the band's sound was augmented by Tony Ashton of Ashton Gardner and Dyke on piano.
Family disbanded in 1973 and former members went on to play in the bands King Crimson, the Streetwalkers and Stud.


3) Family were a disco group who formed in the 1970's and released the single 'Music (Listen To The Music)', on the Salsoul label which was later re-released on the Suss'd 2007 compilation 'Deep Disco Culture Vol. 2'.

Once Upon A Time: Bandstand CD7

Once Upon A Time: Sweet Desiree CD14

Once Upon A Time: Old Songs New Songs CD5

Once Upon A Time: Music In A Doll's House CD1

Once Upon A Time: It's Only A Movie CD8

Once Upon A Time: Fearless CD6