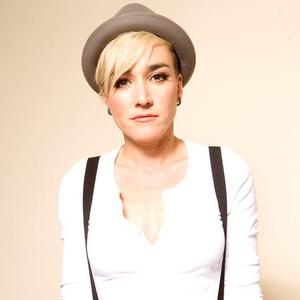 Elli Erl (born Elisabeth Maria Erl on May 25, 1979 in Straubing, Bavaria) is a German musician, who came to fame as the winner of the second season of the television show Deutschland sucht den SuperStar, the German version of Pop Idol. Erl had a typical childhood growing up in Straubing, Germany with her parents Ludwig and Renate and her brothers Josef (Josey) and Ludwig Jr. In elementary school she started learning the trumpet, piano and the guitar opposite expanding interests in tennis, cycling and skiing.

Erl had a typical childhood growing up in Straubing, Germany with her parents Ludwig and Renate and her brothers Josef (Josey) and Ludwig Jr. In elementary school she started learning the trumpet, piano and the guitar opposite expanding interests in tennis, cycling and skiing. In her late teenage years she became the lead singer of several soul and rock bands, including The Gong FM Band, LOP and the more popular Panta Rei. After her high school graduation Elli decided to become a student teacher and began studying Music and Sports at Regensburg University.

Around the same time, in 2003, she participated in the second season of Deutschland sucht den SuperStar. Because of her massive stage experience, her raspy voice and the unconventional look she was seen as an early favourite by the judges and also by the audience, who enabled her to sing against comrade-in-arms Denise Tillmanns during the final show. However, in the end she beat out runner-up Tillmanns by a margin of 11 per cent. As of 2007 she is the show's only female winner.

Elli's first single "This Is My Life" (written and produced by Dieter Bohlen) was released in April 2004 via BMG. In comparison with "Take Me Tonight", the debut single by first season's winner Alexander Klaws, the song failed to become a big hit and peaked only at #3 on the German single chart. Afterwards Elli decided not to collaborate with Dieter Bohlen once again (as Klaws had done before), caused by personal and musical differences with the judge. She eventually released her self-composed second single "In My Dreams", but neither the single nor her debut album "Shout It Out" could reach the top 30 once again. As a consequence she went on tour with her band Panta Rei for some time.

In winter 2006 Erl's previously unreleased record "Better Than the Best" was chosen to become the Corporate Song for DHL.

After her 2007 Album "Moving On" failed to make an impact she chose to get full creative control over her subsequent work and founded her own record label 1773 Records.

Her third album "Human" is slated for a May 2009 release. Erl has written most of the tracks and played several instruments (acoustic guitar, piano, harmonica and accordion) on the album