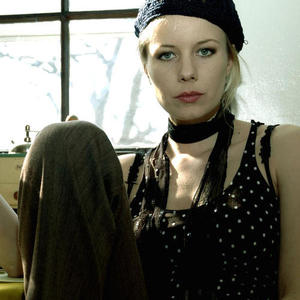 Edie was born in The Netherlands near Rotterdam. After highschool she left home to go travel the world. She lived in Paris, Sydney and settled in Los Angeles where she stayed for 6 years. She first started singing and writing music in LA. She bought her first guitar and started writing! At an open mic night, her very first performance ever, she met writer/producer Martin Motola with whom she went on to make her first album "Shades" in 2001.

She co-produced the cd having gotten handy with computers and recording programs.
Edie played at LA venues like Genghis Cohen, the Kibbitz Room and The Cat Club.
In 2003-04 she spent a year in Amsterdam, playing European clubs in The Netherlands, Paris and London.
The video for Crave was also shot in Amsterdam.
She recorded a batch of songs "The Basement Songs" one of which made it onto the next album "NU" which was recorded in Nashville, TN where Edie now resides.
She moved to Nashville in 2004 and has played the local circuit a lot, venturing out on small tours regularly.
Edie's song "Entendu" of NU was used in the movie Zerophilia as well as the song "Through" a new track for the third cd "Realities"
Realities was again co-produced by Edie and Martin Motola and split released on the Atlanta based label Stickfigure.
The Dutch label AG Music is set to release a single of the song "Ca y est" in May 2007!!

The song received some wonderful response and support on Dutch radio stations which led to? further collaboration between Edie and ?AG Music. During the late summer of 2007 the recording of Edie's 4th studio album began in Alkmaar.?Theo de Jong engineered and produced the 11 new songs, one of which is a cover of Prince's hit "When doves cry"?The album is set to be released in March 2008.