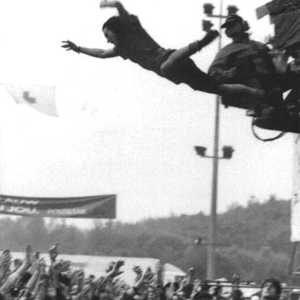 Eddie Vedder (born Edward Louis Severson III on 23 December 1964) is the lead singer and lyricist for the band Pearl Jam. He has also been involved in other music outside of Pearl Jam, and released his first solo album, a soundtrack to the movie 'Into the Wild' in September 2007. In the 1980s Vedder sang with several Southern California rock bands, most notably Bad Radio, but rose to fame only after moving to Seattle in 1990 and joining Pearl Jam.

Yet Vedder's first appearance on a major label recording was not on Pearl Jam's debut Ten, but as a backing vocalist on the Temple of the Dog album, a tribute to late Mother Love Bone singer Andrew Wood that featured members of both Pearl Jam and Soundgarden.
In addition to playing with Pearl Jam, Vedder has performed and recorded with numerous well-known artists, including Bad Religion, Fastbacks, Neil Finn, Jack Irons, Nusrat Fateh Ali Khan, Cat Power, R.E.M., Supersuckers, Mike Watt, Wellwater Conspiracy, The Who, The Doors, Bruce Springsteen, Rolling Stones, Peter Frampton, U2, and Neil Young. On Pearl Jam records he uses the pseudonym "Jerome Turner" for his non-musical (usually design and artwork) functions. He has also sometimes used the pseudonym of "Wes C. Addle" ("West Seattle").

Vedder spent his childhood in Evanston, Illinois, near Chicago, Illinois. His parents divorced in 1965, when Eddie was only one year old. His mother Karen soon married a man named Peter Mueller. Eddie had been named "Edward Louis Seversen III" after his father, Edward Louis Severson, Jr., but was raised as "Eddie Mueller". He grew up believing that Mueller was his biological father. In the mid-1970s the family, including Eddie's three younger half-brothers, moved to San Diego County, California. It was at this point that Eddie, who had received a guitar from his mother on his 12th birthday, began turning to music as a source of comfort. Eddie's mother and Mueller divorced when Eddie was in his late teens. His mother and brothers moved back to the Chicago area, but Vedder remained with his stepfather in California so he would not have to change high schools. It was not until some time after the divorce that Eddie learned the truth about his parentage. His already bad relationship with his stepfather became increasingly strained, and Eddie eventually dropped out of school and joined the rest of his family in Chicago. He also changed his name to Eddie Vedder, "Vedder" being his mother's maiden name.

In 1984 Vedder returned to San Diego with girlfriend Beth Liebling. He kept busy recording demo tapes at his home and working at various jobs, including a position as night attendant at a local gas station. Soon the rather shy singer became the vocalist for San Diego band Bad Radio. After he left that band, Vedder's friend and former Red Hot Chili Peppers drummer Jack Irons gave him a demo tape from a band in Seattle that was looking for a singer. Vedder recorded vocals for three of the songs, which later became Pearl Jam's "Alive", "Once", and "Footsteps". Vedder wrote the song lyrics as a "mini-opera" about a young man scarred by both the death of his father and a sexually abusive mother ("Alive"). The man grows up to become a serial killer ("Once") and is eventually imprisoned and sentenced to death ("Footsteps"). When they heard the tape guitarist Stone Gossard and bassist Jeff Ament invited Vedder to come to Seattle to audition for the band that soon became Pearl Jam.

Many front men in the 1990s and early 2000s have been influenced by Vedder's deep vocal range and singing style, including the front men of Creed, Puddle of Mudd, and early Nickelback, among others.

Vedder married longtime girlfriend Beth Liebling in 1994. The couple divorced in 2000. Vedder is currently dating Jill McCormick. Vedder and McCormick have one daughter, Olivia, who was born in 2004.

In 2007 he released his first solo album "Into The Wild" which is the soundtrack by the motion picture of the same title. On this album we hear a more quiet Vedder, often only accompanied by ukulele. Songs like "Society" and "The Wolf" are bone chilling in the context of the movie storyboard (based on the book by Jon Krakauer).

The Satellite Songfacts states that Vedder's second solo studio album, Ukulele Songs, which comprises original songs and covers all played on the ukulele was released on May 31, 2011.

Water On The Road

Walks On His Own