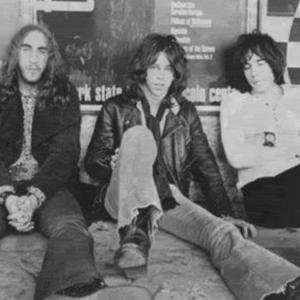 There is more than one artist with this name: 1) Dust is an angst-fueled hard rock power trio from New York. They had some early punk spirit while standing firm in what was to become metal. Self titled 1st lp released 1971. 2nd album "Hard Attack" released 1972. Bassist Kenny Aaronson went on to play with Rick Derringer and Blue Oyster Cult. Drummer Marc Bell eventually became Marky Ramone, the second drummer for The Ramones. Guitarist/producer Richie Wise went on to co-produce the first two Kiss albums.

2) Dust is a doom metal band that formed in 1998 in Germany. They have put out two LPs: "High Density Amplitude" ('06) and "Receive the Frequency" ('08) along a myriad of EPs
www.myspace.com/dustdoom

3) Dust is a solo artist based out of Fort Lauderdale, Florida. He has two albums released, Trapped Behind Glass and Invisible Chains.
Brendan is the man behind Dust, and he got his start recording his own work in Boulder, CO, circa '97. In 2001 he quietly released Trapped Behind Glass. The songs for Invisible Chains were recorded mostly in 2002 but only saw a release date in 2005. Brendan has since relocated to Fort Lauderdale, FL, and is busy working on this next release.

4) Dust (or DJ Dust) is the DJ and producer for the hip-hop group Mars Ill, from Atlanta, GA. Dust has released several solo side projects.

5) Dust is a Portuguese rock band that released their debut album in 2006.

6) Dust is a Lycia side project that was originally formed by Mike VanPortfleet and John Fair in 1994. The first recording sessions took place in the Summer of '94, and only a mere five songs were released on various compilations. John Fair is picking up where he and Mike left off and creating new compositions (as well as recreating some past material) in the "DUST" name, but moving in a more orchestral direction.

7) DUST is a new band that consist of 4 guys from Liverpool who have been round the block. Jamie & Franny were in the top ten Liverpool band SPACE & Vince played guitar for ex Beatle drummer Pete Best.

9) Dust was a Romanian rock band which came alive in January 1998.Razvan Moldoveanu (drums) and Florin Simion (bass) met in a rather lucky event Giani Bodea (guitar and vocals) and Ingy Dust (guitar).They put themselves to work rehearsing on MetallicA songs and soon after creating their own. After a while they began having small concerts at "Culture House - Nicolae Balcescu" and some other places.They were forced to leave their rehearsing room of "Culture House - Nicolae Balcescu" and moved to the basement of an apartament building, but unfortunately the bands stuff was stolen and DUST was "dead" for about one year. After this long break the band found another room at "Mill Dambovita", changing the vocal player, so Giani was replaced with ingy and the style of the band come ever more closer to what they liked.Soon they had concerts in "Buzau City","Le Noir","Le Grand Maguy","Free Riders Harley-Davidson Festival" and other locations.After a concert in Calarasi City, Razvan (drums) left the band departing for England. In Spring 2002, DUST changed again rehearsing location to "Mill Plevnei" and George Tudor was brought to the band to be drum player.In the same time Giani was cast out.The firs concert in the three man line-up took place in Buzau City at "TOP T Festival" were the public had a very good reaction.In July, the band released the first demo cd "DEMONstration" recorded in Green Hours Club with the help of Nicu Galie.In the middle of Summer 2002, the band took a brake, 3 months, because ingy was in the USA. Now the band is back and they had already three concerts in Bucharest in Green Hors Club, "Unifest Festival" and "Super Metal Live". DUST would to like to thank to: Misses Cati, Nicu Galie, Horia Gorgar, Gorgo and Master, Ani Stoica, Maria from Le Noir, Tolea Postovei, Titus, friends and family and ALL THE FANS.

10) Dust is a group comprised of Ralph Lamb, Andy Ross (also see The Easy Access Orchestra) and Adam Phillips. It is one of many groups these musicians are involved with.

11) Dust was an alternative rock band in Vancouver, Canada that was active from 2002 to 2007. It featured Anton Lipovetsky on guitar and vocals, Koby Schuster on bass and Simon Marmorek on drums. They recorded a total three singles and one music video, all of which were self-released.

12) Dust was an alternative band from Nasice, Croatia, active in the late 90's.

13) Dust is a Funk / Rock band from Brno, Czech republic. Their influences are The Beatles, The Pink Floyd, Prince, ... You can visit their official page on http://www.dusti.cz/.

14) DUSt is a japanese indie rock band from Tokyo

15) Dust has been making waves around the Melbourne scene for nearly 8 years now and is one of the scenes most established players.
Humble beginnings playing Hip Hop and drum and bass monthly at Black Cat and occasionally at the Lounge and her flawless and highly technical approach to mixing led to Dust supporting some of the biggest names in drum and bass and dubstep to grace our shores including Marky, Storm, Marcus Intalex, Doc Scott, Calibre, Klute, Grooverider, Die, Clipz, A Sides, Hudson Mohawke & Headhunter.
Her consistency was rewarded with worldwide recognition by the organisations Junglist Sistaz and Hardstep Sistaz, inclusion into the mighty Elementz Sound collective and so many regular bookings that she was titled "Melbourne's First Lady of Drum and Bass" in a gig write-up.
Dust has run International events with Joe Seven for Klute, Storm, Calibre & Mark Pritchard, Doc Scott & Marcus Intalex and also promotes local hip hop night Anytime with Joe Seven and Dan Loot and Drum & Bass night Polaroid with LowQui, Joe Seven and Consequence.

16) Dust was a local band in Birmingham, AL, but around 2004 changed their name to Leader Dog

18) Dust is a psytrance producer from Italy, who recently released his debut album "I Don't Like Psychedelics" on Looney Moon Records (January 2012)

The Fall Of All Things

Picture Of My Heart (CDS)