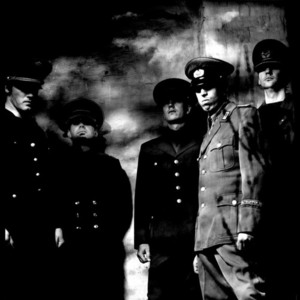 Norwegian avant-garde technical black metal, self-described as "Bunker Metal". Drottnar is bizarre; orthodox bedlam skillfully crafted through cutting- edge unorthodoxy. The totality of the concept compels beyond what trends or external preferences will ever decide. Conceived through a series of deeply vested intentions and ideals, Drottnar was proudly established in 1997. The bandmembers' previous relationship to death metal evolved in patterns of fierceness, slightly changing into a more extreme taste.

The band's first promo A White Realm was recorded in 1998, containing four black metal tracks. Staying quite underground for two more years, the material was eventually released on the first full lenght album Spiritual Battle in 2000. After the debut album, Drottnar moved to more experimental and technical directions, and the wrath of the four track EP Anamorphosis was unleashed through Momentum Scandinavia in 2003. This release is characterized as the first manifest of Drottnar's now well known and peculiar style of black metal, also recognized as pioneering bunker metal to the inner circles.

In 2006 Drottnar again tightened its punishing musical fist through a noteworthy full- length album. Welterwerk was recorded in Subsonic Society and produced by Lars Klokkerhaug, who previously worked with bands as Satyricon, Darkthrone, Enslaved and Red Harvest. The album captures both the grimness of old-school black metal, as well as piercing contemporary avant-garde with revolutionary new themes. Welterwerk was followed up by the 7" vinyl featuring Victor Comrade and Ad Hoc Revolt.

Drottnar is not only a studio experience, but also a hard-hitting live one, gaining acknowledgement for its tight and untraditional live appearance.