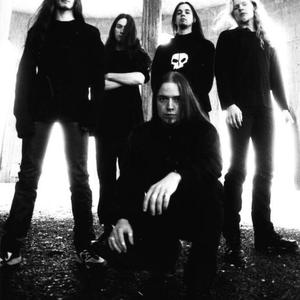 Extol is a metal band from Oslo, Norway, formed in 1993. Their style has varied and they have always kept a unique sound. They have shown influences from death metal, black metal, thrash metal, and progressive metal all at some time in their career. The band was formed by drummer David Husvik and guitarist Christer Espevoll, who had been playing together and wanted to start a band. Peter Espevoll became their vocalist. In 1994, bassist Eystein Holm joined the band just before their first gig. Emil Nikolaisen joined as a second guitarist in 1995.

The band was formed by drummer David Husvik and guitarist Christer Espevoll, who had been playing together and wanted to start a band. Peter Espevoll became their vocalist. In 1994, bassist Eystein Holm joined the band just before their first gig. Emil Nikolaisen joined as a second guitarist in 1995.

In 1996, they recorded for Norwegian metal compilation, "Northern Lights". Later that year they recorded "Embraced", a short demo. Ole B&oslash;rud, formerly known for his death/doom project Schaliach, soon replaced Nikolaisen, who wanted to give more attention to his other projects. Extol's debut album, "Burial", was released in 1997 on Endtime Productions and showcased a death metal sound. It was licenced to the US through Solid State Records and to Japan through Avalon Records. The next year, they released the EP, "Mesmerized", which featured three industrial remixes of songs from "Burial" by the bands raison d'&ecirc;tre and Sanctum. Eystein was replaced by Tor Magne Glidje on bass. "Undeceived" was released two years after "Burial", and featured a heavier and darker sound. Then Ole left the band, so Tor Glidje switched over to guitar, and John Robert Mj?land joined as bassist.

In 2001, another EP, "Paralysis", was recorded; to be released in Sweden only. This EP featured a cover of "Shadow of Death" by the reputed American avant-garde/thrash metal band Believer, whom the band considers to be a great influence. After "Paralysis", Tor Magne left the band to focus on his other project, Ganglion, and Ole returned to the line-up. After "Undeceived" was released, Extol was no longer obligated to Endtime, and they signed with Century Media in 2002.
"Synergy[album]", released in 2003, saw the band evolve into a technical thrash unit. Lead singer Peter Espevoll has said that it was largely a tribute to the band Believer. The music on the album is very similar to Believer's style of thrash metal. Following the release, Extol toured Europe and US with the Swedish progressive death metal group Opeth.

In June 2004, Ole B&oslash;rud and Christer Espevoll left Extol to "invest their time and energy elsewhere". Taking their place as permanent members in the band are the return of Tor Magne Glidje and Ole Halvard Sveen, both from Ganglion, that merged with Extol when four out of five band members ended up playing in both bands.

In 2005, the band released what could be considered their most diverse album; "[album artist=Extol]The Blueprint Dives".
A music video was shot for the song "Pearl." The album was nominated for the Norwegian Grammy, Spellemannprisen, for best Norwegian metal album in 2005. Also, "Blueprint" was voted for the Top 5 metal albums of the year list by the readers of one the biggest newspapers in Norway, Dagbladet. The album received rave reviews: For example, Eduardo Rivadavia of Allmusic gave the album 4.5/5 and wrote:
"To Extol's greatest credit, offhand comparisons to other bands are almost impossible!"
Afterward, Extol toured Europe with Mastodon, God Forbid, Opeth, and the US with Haste the Day, Becoming the Archetype, and The Showdown.

On August 9, 2007 the band announced through their MySpace page that they were currently on a hiatus.

In 2012, the production of the crowd funded film 'Extol - The Documentary' marked the return of the band. On a facebook post, the remaining members, Peter Espevoll and David Husvik, along with former member Ole B&oslash;rud, announced that the band was back and that they were in the process of reccording the fifth album of the band.

Sideprojects:
The band members have all, at different times, had different projects. The current members of the band at various times were all members of post-thrash/rock group Gangli&oacute;n. Ole Sveen, John Mj?land, and Tor Glidje comprise the avant-garde black-metal band Lengsel. David Husvik has played for The Crest and technical thrash group Absurd, and collaborated with former Spiral Architect members for Twisted Into Form.