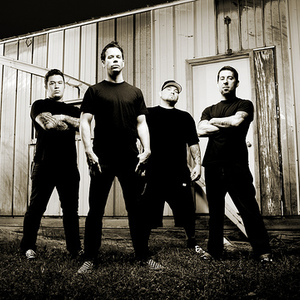 Living Sacrifice formed in the fall of 1989 by Darren "D.J." Johnson (bass/ vocals), Lance Garvin (drums), Bruce Fitzhugh (guitar) and Jason Truby (guitar). Starting in Little Rock, Arkansas, the average age of the band members was 18. There were not many places for Living Sacrifice to play but then a new all ages club had just opened called Vino's. It was the only place to accept any kind of thrash, metal or punk.

Starting in Little Rock, Arkansas, the average age of the band members was 18. There were not many places for Living Sacrifice to play but then a new all ages club had just opened called Vino's. It was the only place to accept any kind of thrash, metal or punk. Trusty (discord records), a punk band, was one of the only local bands that LS could look to for inspiration because all the "metal" bands were busy playing Metallica covers badly. Living Sacrifice's first show at Vino's, and third show ever, was opening for Shelter (Revelation records) the former Hari Chrisna hardcore band fronted by Ray Cappo ex- Youth of Today (how's that for indie cred?).

Two bands that inspired LS in the Christian metal area where Believer (Roadrunner and REX Records) and The Crucified. After forging a mentor type relationship with Believer, Living Sacrifice recorded a demo to present to their label home REX Records. It worked. One year after forming Living Sacrifice was signing to REX Records.

1991
The self-titled album was released by REX Records (produced by Kurt Bachman of Believer and label exec. Doug Mann). This first record showed obvious influences of the young Living Sacrifice. Bands that come to mind are Testament, Anthrax, Megadeth and oh yeah, Slayer. In reality, the Slayer comparisons convinced the band to explore a more death metal sound on the next record.

1992
Living Sacrifice was rushed back into the studio for another record. The experience in the studio this time was not good. 6 days to record and mix the record. But the result was Nonexistent. The sound of the Florida death metal scene had a profound effect on these songs and particularly the vocal delivery. Two months of touring followed after this as well.

1993
On Christmas day Living Sacrifice drove their van with all their equipment to a tiny town outside of Hershey PA and in 1994 Inhabit was released. This third recording for REX Records turned out to be the heaviest and most technical record to date. The only touring LS did on Inhabit was a one week tour with Malevolent Creation, which was fitting since Inhabit was musically inspired by Malevolent's second record Retribution.

1995
REX Records were in financial difficulty and Living Sacrifice took the opportunity to leave the label with all of their masters for all three records. This would prove a smart move later on.

After taking some time off it became clear that founding member DJ would be leaving the band. That left a need for a vocalist and bassist. Bruce Fitzhugh stepped up to sing for the band. Chris Truby, Jason's brother, stepped in on bass.

1996
Tooth and Nail Records was fast making a name for themselves in the hard music market. They wanted to start an imprint of the label called Solidstate records that focused on extreme heavy music. Living Sacrifice became one of the first bands to launch the imprint along side other, more hardcore acts, like Strongarm and Zao. Living Sacrifice fit right in.

1997
Reborn was recorded in Little Rock, Arkansas by Barry Poynter.
The aptly titled record redefined the band's musical focus and garnered them a slew of new fans -- and probably some of their first outside of the Christian music market. Though the music was decidedly more straightforward, the lyrical focus stayed the same, and the melodic guitar solos and fast-paced galloping drums remained. Despite the underground success of the album, with Living Sacrifice quickly becoming a cornerstone band on the new imprint's roster, further lineup changes happened. Founding guitarist Jason Truby and his only recently introduced brother, bassist Chris Truby, exited the band.

1998
Cory Putman of the Arkansas band Eso- Charis played guitar before the Truby's permanent replacements were found in guitarist Rocky Gray, and bassist Arthur Green, late of Eso-Charis. Green was not the only member of Eso-Charis to join up -- drummer Matthew Putman soon followed. Putman was instrumental in fleshing out Living Sacrifice's sound with additional percussion alongside Garvin, with a two-drummer approach unique to heavy music; different even from Sepultura, Neurosis, and Slipknot, who have all experimented with extra percussion.

2000
LS began work on the fifth record recording again with Barry Poynter. The Hammering Process, further streamled the band's sound, decimating it into its base elements, driven by rhythm and heavy guitar crunch without being tantamount to any kind of musical "sellout." Further touring ensued throughout 2000 and 2001, including several dates with the band's friends and former labelmates, P.O.D., as well as touring with Project 86 (Atlantic Records) and a co-headlining tour with Zao. Touring nonstop for 2 years gave The Hammering Process the top sales of any Living Sacrifice album to date.

2002
Living Sacrifice had come off the road for a time and started writing what would be their sixth and final record. Conceived in Fire was produced by Barry Poynter and mixed by the amazing Andy Sneap who has also worked on records by Killswitch Engage and Machine Head.

2003
In the wake of insecurity surrounding the future of Living Sacrifice Rocky Gray took an opportunity to play drums for Evanescence, the Little Rock AR band who had just recorded a debut record for Wind-Up records. Rocky is just one of those guys that plays guitar and drums equally well.

At this point the members of Living Sacrifice felt that the band had run its course and decided to end the band. Cory Putman was brought in once again to fulfill final touring obligations and festivals that were booked through out 2003.

Living Sacrifice played their final farewell show in Little Rock AR at Vino's, where it all began, on June 28, 2003. They were joined by fellow Solidstate labelmates Underoath, Demon Hunter, The Agony Scene, and Extol.

As of 2008, Living Sacrifice has reformed and is planning on touring in summer 2008 and releasing a new album, which will be released at some point this year. The band's website now links to the official myspace page, which states the following:

"LIVING SACRIFICE has returned. Founding members Bruce Fitzhugh (Vocals / Guitar) and Lance Garvin (Drums) have reunited with Rocky Gray (lead guitar) and Arthur Green (bass). The band will be on tour this summer and we are already writing material for our brand new album, which will be released in 2008. We like and appreciate the fan pages but this is the OFFICIAL Living Sacrifice MySpace page. Stay tuned for updates."