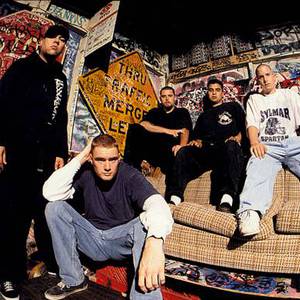 Founded in Los Angeles in the late 80's as part of the thriving hardcore scene, downset has evolved into an icon of sorts. As the original blenders of rap, funk, hardcore, punk, metal, and socially aware lyrics, they drew influences from Black Flag to Black Sabbath, Public Enemy to Bob Marley. Becoming a huge draw, the industry took notice and they caught the attention of Mercury/PolyGram Records and released their self titled debut in 1994.

From California, they perfected their unique, in your face assault of rap/rock fusion pounding street anthems, along with artists like Rage Against The Machine and KoRn, who helped to pave the way for the hip-hop/metal explosion of the late 90's. The band features Rey Oropeza (Vocals), Chris Lee (Drums), Ares Schwager (Guitars), and Rico Villasenor (Bass).

In 1992, Social Justice (1987-92) changed their name to downset and released their self-titled debut album on Abstract Records (1994). The album was praised by critics, exploring various social issues in their songs, including the death of Oropeza's father by the LAPD in the song Anger.

Later in 1994, downset. signed a deal with Mercury Records (Polygram), and released Downset their self-titled effort in the same year. In 1996, the band released their most commercially successful album, Do We Speak a Dead Language?, through Mercury.

Making their departure from Mercury Records, downset were scooped up by Epitaph Records and released their 3rd album, Check Your People in 2000. That same year, rumours circulated that Oropeza was to resume Rage Against the Machine's Zach de la Rocha vocalist position after Zach left. Other replacement contenders were Chris Cornell, Chuck D, and B-Real of Cypress Hill. Cornell was ultimately chosen, and Rage Against the Machine transfigured into Audioslave.

After many line-up changes (most notably, the loss of long-time downset. guitar player, Rogelio Lozano and the addition of original drummer, Chris Lee), in 2004 downset. released their latest album, Universal, on independent record label Hawino Records.

Without mainstream recognition, downset are regarded as a noteworthy influence within the nu-metal & rap-metal subgenres. In addition to headlining the second stage at Ozzfest 1997, they've toured with Linkin Park, Slayer, Metallica and Anthrax, among many other eminent metal names.

The band's original moniker was Social Justice. They released their debut album, Unity is Strength, in 1989 and the EP I Refuse to Lose under this name.

downset. called it a day in May 2009, claiming the band had 'officially run its course'.

Do We Speak A Dead Language?

No More Freedom In A Cage