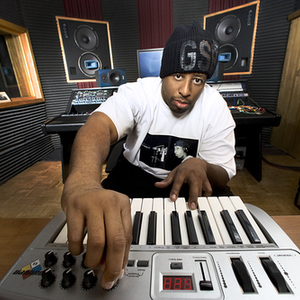 Christopher E. Martin (born March 21, 1966), better known as DJ Premier (or Primo by his fans, fellow musicians, and critics), is a prominent American hip hop producer and DJ, and the instrumental half of the duo Gang Starr, together with MC Guru. Contrary to popular belief, he did not found nor even co-found Gang Starr. He was introduced to DJing while attending school at Prairie View A&M in Houston, Texas. DJ Premier's original stage name was Waxmaster C, the "C" taken from his first name, Chris, although he had already changed it to DJ Premier at the time he joined Gang Starr.

Contrary to popular belief, he did not found nor even co-found Gang Starr.

He was introduced to DJing while attending school at Prairie View A&M in Houston, Texas. DJ Premier's original stage name was Waxmaster C, the "C" taken from his first name, Chris, although he had already changed it to DJ Premier at the time he joined Gang Starr.

Considered by many fans to be one of the greatest hip hop producers, DJ Premier has produced countless tracks, for many groups and solo artists since the early 1990s. These include notable tracks for artists such as Jay-Z ("D'Evils", "So Ghetto"), Big L ("The Enemy"), The Notorious B.I.G. ("Unbelievable", "Kick In The Door", "Ten Crack Commandments"), Nas ("N.Y. State of Mind", "Nas Is Like"), Pitch Black ("It's All Real"), M.O.P. ("Downtown Swinga"), Jeru the Damaja ("Come Clean", "My Mind Spray"), KRS-One ("MC's Act Like They Don't Know"), Mos Def ("Mathematics"), Non Phixion ("Rockstars"), and Royce da 5'9" ("Boom").(Full list: djpremiertrackology.8kilo.com)

Outside of Gang Starr, some of Premier's most lauded work is his collaborations with Jeru the Damaja and Group Home. With the former, Premier crafted one of the East Coast's landmark albums in the form of The Sun Rises in the East, released in 1994. Their follow up to this, 1996's Wrath of the Math, was regarded as a solid effort but not on par with its predecessor, although it did contain Jeru's biggest hit to date, "Ya Playin' Yaself". Group Home's Livin' Proof (1995), although greatly overlooked at the time of its release, has eventually come to be critically acclaimed.

In 1994, DJ Premier collaborated extensively with jazz musician Branford Marsalis's experimental group, Buckshot Lefonque, for their debut album. During the making of music video director, Hype Williams' 1998 film, Belly, DJ Premier collaborated with neo soul leader D'Angelo for a song called "Devil's Pie", which was originally intended only for the film's accompanying soundtrack. However D'Angelo soon changed his mind and decided to include the song on his sophomore album Voodoo (2000) In 2006 he co-produced Christina Aguilera's Back To Basics album.

DJ Premier's style of production epitomises the New York sound from his earlier peers. He is known for sampling jazz, funk, and soul artists, as well as sampling an artist's past work, when he is creating a new track for that same artist. In addition, his photographic memory of rap lyrics allows him to distinctively "speak with his hands" by scratching in lyrics from several different songs to construct new phrases [1]. Premier's non-Gang Starr collaborations are well-known for his often-imitated signature of combining short vocal samples, often from multiple artists, to create a chorus. For example, for the chorus of Mos Def's "Mathematics", Premier cuts, in quick succession:

"The Mighty Mos Def..." (from Mos Def's "Body Rock"),
"It's simple mathematics" (from Fat Joe's "John Blaze"),
"I revolve around science..." (from Ghostface Killah's verse on Raekwon's "Criminology"),
"What are we talking about here..." (unknown origin),
"Do your math.." (from Erykah Badu's "On & On"), and
"One, two, three, four" (from James Brown's "Funky Drummer")
On certain artists' work the vocal samples will all be vocal samples of the artist from the artists' past work; "Nas Is Like" and "2nd Childhood" with Nas are two well-known examples of this.

On Jeru the Damaja's "Physical Stamina," however, Premier sampled and chopped up recordings of seminal electro-acoustic music from the 1960s.

Premier usually creates a two-bar melody that repeats itself throughout the song. The aim of this is to showcase the MC's skills by bringing focus away from the beat, while creating the song's mood and a solid backdrop. Premier often changes speeds, filters and chops his breaks and adds scope to the melody with chimes and strings.

He has also shown innovation by playing rarely-used elements into a rap song (such as the xylophones on Biggie's "Kick in the Door" or the ambient nature sounds on Nas' "Nas is Like"), and his wide range of instruments (the piano loop on Jay-Z's "D'Evils" versus the strings on Rakim's "New York (Ya Out There?") and production techniques (he played the melody backwards during the second half of Jay-Z's "A Million and One Questions (Rhyme No More)").

Premier's drums have been known for complimenting his melodies. For example, during Nas' "NY State of Mind", two bars have a simple round of kicks and snares; in the following two, a complementing second set of drums plays out. This is repeated throughout.

DJ Premier currently owns two record labels. "Year Round Records" was founded in 2002 and has so far released several DJ Premier mixtapes as well as two 12" vinyl singles for NYG'z and Blaq Poet. "Works Of Mart", which is also the name of his publishing company, was founded in mid 2006 and released 12" vinyl singles for artists Tef (aka Teflon) and F.A.B.I.D. (H. Stax and Mike Rone).

Since 2001, DJ Premier mentioned several times the plan to release a solo album entitled "A Man Of Few Words", which has yet to be released. Other confirmed upcoming projects are a full-length colaboration with Nas, Blaq Poet's long delayed album "The Best That Never Did It", Tef's (aka Teflon) long announced album "Contraband" and last but not least proteg?s NYG'z long delayed debut album "Pros and Cons". As of early 2006, like many other artists, he keeps in touch with his fans through his blog on myspace.com, on which he has announced upcoming productions for Amerie, Canibus and many other yet to be released artist songs.g Str