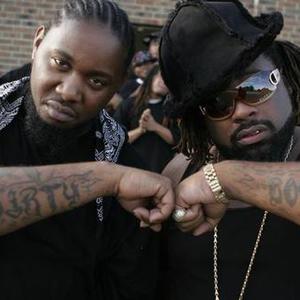 Dirty is a southern rap duo notable for releasing albums like The Pimp & Da Gangsta that experienced remarkable popularity in their hometown of Montgomery, Alabama and The Art Of Storytelling that charted #18 on the Top Rap Albums and #40 on Top R&B/Hip-Hop Albums on Billboard. Group members Big Pimp (born 1978) and Mr. G Stacka The Gangsta (born 1983) fuse quick-firing styles with a unique Alabama style.

Dirty signed with Universal Records in late 2000. They were the first major act to arise from Alabama. They came out with their first single Hit Da Flo in 2001. They released two albums on the label, The Pimp & Da Gangsta and Keep It Pimp & Gangsta. Love Us Or Hate Us was released in 2005 on Rap-a-Lot. The album included sharp criticism aimed at Universal and other rappers signed to the label. The duo formed their own label, Blackklown Records and helped build the career of their cousin Burn One. Dirty released 3 albums on Blackklown Records so far: Hood Stories, The Art Of Storytelling & Tha First Supper.

Married To The Game

The Art Of Storytelling

Love Us Or Hate Us (Chopped & Screwed)

Love Us Or Hate Us