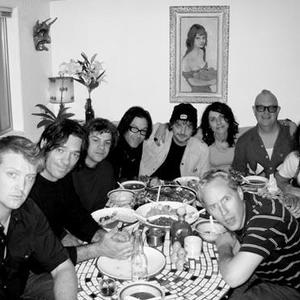 The Desert Sessions are a musical improv series "that cannot be defined." Founded by Josh Homme in 1997. Artists such as PJ Harvey, Jeordie White, Dave Catching, Nick Oliveri, Mark Lanegan, Chris Goss, Alain Johannes, Dean Ween, Gene Trautmann, and many others have contributed as songwriters and musicians. The Sessions began in August 1997 at a place called Rancho de la Luna in Joshua Tree, California, when Homme brought together musicians from the bands Monster Magnet, Goatsnake, Earthlings?, Kyuss (his own band) and Soundgarden.

The Sessions began in August 1997 at a place called Rancho de la Luna in Joshua Tree, California, when Homme brought together musicians from the bands Monster Magnet, Goatsnake, Earthlings?, Kyuss (his own band) and Soundgarden. The ranch is an old house filled to the brim with rare and unique recording equipment and instruments and is owned by Dave Catching and the late Fred Drake. Songs are written on the spot in matters of hours usually, and no place in the home is safe from the music. Legend after myth after story has grown around the Sessions, and most of them are most likely quite true. For example, the song "Creosote" from Volumes 9 & 10 was written by Dean Ween and Alain Johannes on the ranch's front porch immediately after meeting each other in four minutes. The first "session" was not actually a Desert Session per se, but Homme and his band at the time (The Acquitted Felons) playing for three days straight under the non-stop influence of mushrooms. Since then the ranch has grown legendary and the Sessions have only grown in intensity and artistic merit.

Though not updated for a long time, the official website is located at http://www.desertsessions.com.

Cover Songs
The Desert Sessions have provided the Queens of the Stone Age with ample cover material, with songs being culled from all but the first two volumes.

From Volumes 3 & 4
Avon appears as Avon on Queens of the Stone Age. Avon, performed by Josh Homme, is the 'sister song' of the track Nova, which has different lyrics and is performed by Peter Stahl. Monster in the Parasol appears as Monsters In The Parasol on the critically acclaimed Rated R. Eccentric Man is a cover of The Groundhogs' 1960s Eccentric Man.

From Volumes 7 & 8
Hanging Tree appears as Hangin' Tree on Songs for the Deaf.

The Desert Sessions, Vol. 8: Can't You See Under My Thumb...There You Are

The Desert Sessions, Vol. 6: Poetry For The Masses...Black Anvil Ego