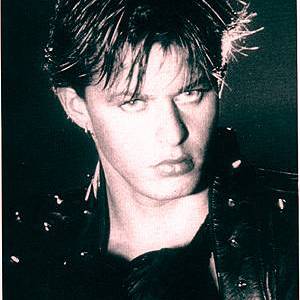 Den Harrow project was popular in the second half of 1980s charting high not only in Italy but also in many other European countries especially in Germany with hits like Future Brain, Bad Boy, Don't Break My Heart, Day by Day , Catch the Fox all from the first two albums Overpower and Day by Day. The name "Den Harrow" was invented by the producers of the project, which according to them is based on the Italian word "Denaro" (money) and a joke about the italian proverb "with money (Den Harrow) you can make money (denaro)".

It is believed that "Den Harrow" has sold over 4 million records world-wide.

After years of continued fame and popularity, the fans of Den Harrow were faced with an unbelievable news, it was revealed both by the frontman of Den Harrow Stefano Zandri and the producers that they had been hiding the truth from their millions of fans. It was disclosed that Stefano Zandri did not actually sing his own songs; he was essentially a character who lip-synched to vocals produced by a number of other Italo singers. And since they did not consider Zandri's name and origin to be trendy enough, the producers R. Turatti and M. Chieregato had decided to invent a fictitious English based last name Manuel Stefano Carry as well as U.S. based birth place Boston Massachusetts, U.S. by concealing Stefano's true Italian origins to be able to market him more easily in the English speaking world. [1]

Most of the songs for Den Harrow project were sung by an American vocalist Tom Hooker Beecher (aka Thomas Barbey, who was residing in Italy during the Italo-Disco era), including Europe-wide hit singles "Don't Break My Heart", "Bad Boy", "Catch the Fox", and "Future Brain". During an interview Hooker explains why it was decided to be done this way:
?There was a small problem, however. He couldn't sing. So the solution was to never let him sing, or to put his voice so low in the mix that it was non existent. He started as an image. He would work on his costumes and clothes and someone else would sing on the records. The truth is, vision is a more developed sense in humans than hearing. People tend to buy and listen what they like to see.?

Also according to Tom Hooker, in the very beginning Chuck Rolando's voice was used in the singles "To Meet Me" and "A Taste of Love". Later on, Silver Pozzoli was chosen to do the single "Mad Desire"; however, Hooker also produced the vocals for the album releases of "Mad Desire". Even though, Tom Hooker continued co-writing tracks for Den Harrow project, producers felt to bring in another vocalist into the studio with a higher voice than that of Hooker's for the 1988 album called Lies. According to Tom Hooker; however, Stefano Zandri has sung on his 1991 single Ocean.[2]

Currently, Stefano Zandri continues to do live performances, especially in eastern Europe, still under the name Den Harrow, allegedly claiming that he has learned to sing himself.

In 1997 Stefano Zandri moved to California to take part in the TV serial Sunset Beach.

In 2006 Stefano Zandri took part in a reality show: "L'isola dei famosi" on Rai Due, a channel of Italian public television.

In 2007 Stefano Zandri released a new song "FEDEN - Lo so", written and sung by him and his wife, only available on his web site that reportedly sold already 16.000 copies, he he is also planning to sell his autobiographical book entitled "Segreti e bugie" (Secrets and Lies) also available on his website.

Back From The Future