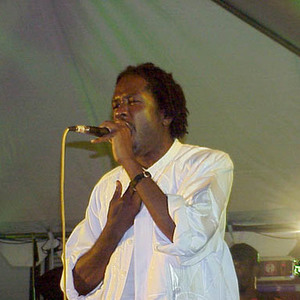 David was born in Belmont, Trinidad on May 6, 1953. One of nine children, he spent much of his early childhood with his grandmother, a spiritual Baptist, growing up near a pan yard and a Shango yard, in a neighbourhood where boys dreamed of being entertainers. He has been baptized three times: as a Baptist by his grandmother, as an Anglican by his mother and as a Catholic when he started school. It was at school that he discovered how much art, painting and sculpture really interested him. Rudder began singing at the age of 11 with a group called The Solutions.

In 1977, he joined the brass band Charlie's Roots and began charting his musical career.

David became an apprentice to the late Ken Morris, a master craftsman known for his copper work and carnival designs. He still paints today and in fact he sees himself more as an artist rather than an entertainer.
David, along with Charlie's Roots, produces and performs for the Carnival productions of, what is arguably, the most innovative and controversial Carnival artist ever - Peter Minshall. Minshall's designs have been used in many major events, the most notable being the Barcelona Olympics of 1990 and most recently The Atlanta Olympics in 1996. Over the years Rudder's music has become intertwined with the yearly Minshall's theatric bands.