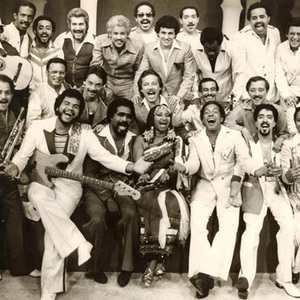 The Fania All-Stars was an illustrious and widely distinguished musical ensemble established in 1968 by composer Johnny Pacheco as a showcase for the leading musicians and singers of the record label Fania Records, the leading salsa record company of the time. In 1964, Fania Records was founded in New York City by Jerry Masucci, an Italian-American lawyer with a love for Latin melodies, and Johnny Pacheco, a talented composer and bandleader born in the Dominican Republic. Jerry Masucci later bought out his partner Johnny Pacheco from Fania Entertainment Group Ltd.

In 1964, Fania Records was founded in New York City by Jerry Masucci, an Italian-American lawyer with a love for Latin melodies, and Johnny Pacheco, a talented composer and bandleader born in the Dominican Republic. Jerry Masucci later bought out his partner Johnny Pacheco from Fania Entertainment Group Ltd. and was sole owner for many years until his death in December 1997.

Throughout the early years, Fania used to distribute its records to music aficionados around New York City, even going as far as selling their products out of the trunks of cars. But eventually good word-of-mouth and immense success from Johnny Pacheco's Ca?onaso recording would lead the label to develop its roster. Masucci and Pacheco, now executive negotiator and musical director, respectively, began acquiring fresh and creative NYC artists like Bobby Valent?n, Larry Harlow and Ray Barreto.

Similar to Pacheco, most of these new talents were residents of the city's barrios and boroughs, that had moved to the city from their homelands and brought their music along. Thus, Fania and it's All-Stars were results of this era of musical renaissance and understanding among the countless cultures of NYC. They created tunes using a variety of genres available in this melting pot, including those of salsa, boogalu, Cuban Jazz and Latin R&B.

In 1968, with Fania Records garnering more acclaim and a troupe of emerging artists, Jerry Masucci and Johnny Pacheco decided to create an ensemble of the most well-known and innovative Fania artists, a continuously-revolving line-up of entertainers known as the Fania All-Stars.

During the 1970s, the star-studded group became renowned worldwide for their spectacular one-of-a-kind musical performances. Because of this, it is no surprise that their music was primarily captured and lives on today through a series of best-selling live recordings.

Among the most treasured of these recordings is the legendary arrangement "Fania All Stars: Live At The Cheetah, Volumes 1 and 2." The set, recorded in 1971 and produced a year later by Fania's own keyboard player Larry Harlow, exhibits the entire All-Star family performing before a capacity audience in New York's Cheetah Lounge. The volumes went on to become the biggest-selling Latin albums ever produced by one group from one concert. To this day, they are is still considered by many as the essence of Latin music.

Following sell-out concerts in Puerto Rico, Chicago and Panama, the All-Stars embarked on their first appearance at New York's Yankee Stadium on August 24th, 1973. The Stars performed before an unprecedented crowd of 63,000 spectators in a concert that highlighted the talents of Ray Barretto, Willie Col?n, Larry Harlow, Johnny Pacheco, Roberto Roena, Bobby Valent?n, and Jorge Santana (younger brother of Carlos Santana), among others. In the days leading up to the concert, it was anticipated that the event would revolutionize the music business similar to how the Beatles did in the early 1960s. In fact, when the All-Stars returned to Yankee Stadium in 1975, they became ingrained in history. This time, the highlighted acts included Celia Cruz, Hector Lavoe, Cheo Feliciano, Ismael Miranda, Justo Betancourt, Ismael Quintana, Pete ?El Conde? Rodriguez, Bobby Cruz and Santos Col?n. That year, "Live at Yankee Stadium" was included in the second set of 50 recordings in the List of recordings preserved in the United States National Recording Registry, solidifying the All-Stars as "culturally, historically, and aesthetically significant."

Just a few months before, in 1974, the All Stars had performed in Zaire, Africa, at the 80,000-seat Stadu du Hai in Kinshasa. This unforgettable spectacle was captured on film by Gast and released as "Live In Africa" ("Salsa Madness" in the UK). This Zairean appearance occurred along with James Brown and others at a music festival held in conjunction with the Mohammed Ali/George Foreman heavyweight title fight. Footage of the performance was also included in the 2008 documentary "Soul Power".

In an attempt to attain a wider market for salsa, Fania made a deal with Columbia Records in the US for a series of crossover albums by the All Stars. The first project was the lukewarm "Delicate & Jumpy" (1976), in which Steve Winwood united with the All Stars' Pacheco, Valentin, Barreto and Roena. It was also in 1976 that the Fania All Stars made their sole UK appearance. They produced a memorable sell-out concert at London's Lyceum Ballroom, with Steve Winwood guesting.

In 1978 the All-Stars released "Live," a fully-blown version of the band recorded in concert at New York's Madison Square Garden in September of that year.

That same year saw the release of "Crossover," the All-Stars' last Columbia Records album, as well as "Havana Jam on Fania," which came from a concert recorded in Havana on March 2nd.

The first signs of recession appeared in 1980, when Fania suffered setbacks including an unsuccessful movie, tension from artists with unpaid royalties, and failed distribution deals with Columbia and Atlantic Records at boosting salsa into the mainstream US market. In addition, the New York salsa scene, which had always been vital to the success of the label, was gradually succumbing to the rise of merengue from Dominican Republic and salsa romantica from Puerto Rico. As the decade ended, the All-Stars recorded fewer albums together, and it was pretty visible that the genre -- and the star-studded group that propelled it -- had reached the end of its golden age.

Although the Fania-All Stars troupe eventually reached a low during the late 1980s, many of the members continued to have individual success in their solo careers. Most notably, Hector Lavoe became an icon in the world of salsa, as people became enchanted both by his music and his tragic life story. In 2007, two films about Lavoe were released, including one produced by actress Jennifer Lopez and salsa star Marc Anthony.

Celia Cruz continued making hits until her death in 2003. In fact, Cruz gained popularity and renewed attention from younger generations throughout the new millennium, and her last singles became the biggest of her entire career. During these years, she was the recipient of numerous Grammy awards, was invited to perform alongside Aretha Franklin at the 2001 VH1 Divas concert, and just months before her passing, Univision presented a special tribute concert featuring over a dozen Latin music performers. After her death in New Jersey, her body was first laid in state in downtown Miami's Freedom Tower--where a quarter of a million people paid their final respects--and was then returned to New York City where tens of thousands of fans paid tribute to her in St. Patrick's Cathedral.

Willie Colon continued producing hits with Ruben Blades and as a solo artist. His latest album was released in 2007, and he currently works for Mayor Michael Bloomberg of New York City.

Today, only a few of the original All-Stars remain alive, as many have passed away in recent years. Nevertheless, their vigorous legacy is one that will live on for many generations. Having sold millions of records and fostered an enthusiastic following of fans throughout the globe, the legendary Fania All-Stars continue to be treasured and recognized as the quintessential Latin band of all time. Already, their music has transcended newer and contemporary genres like bachata and reggaeton. The music created by the All-Stars continues to entertain old and young fans alike, and they are as popular on the radio as they were back in the 70s. Interest in the iconic group has not declined, as albums, concerts, films and videos continue to be produced about the golden years of salsa.

During their extended and illustrious history, the New York City-based Fania All-Stars took their provocative and stirring rhythms on a journey throughout the world, and left music lovers enchanted with a remarkable collection of memorable performances that will capture the hearts and souls of listeners for many generations to come.