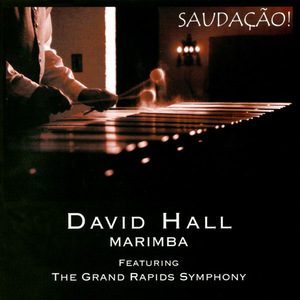 As one of America's leading marimbists, David Hall has been delighting audiences for years with his virtuosity and musical sensitivity. Winner of the Top Prize awarded at the 1998 LHS International Marimba Competition, ?Hall captures the audience with his ease of performance and stuns listeners with the musical capacity of the marimba? (GR Press). In addition to his many recitals throughout Michigan and the Midwest, Mr. Hall

has soloed numerous times with the Grand Rapids Symphony and other West Michigan Arts Organizations. His educational/school presentation Marimbamania!, featuring marimbas and xylophones from around the world, is popular with area schools. In 1999, Hall was invited to Taiwan for a week-long concert tour.

Mr. Hall's CD, ?Saudacao?, featuring the Grand Rapids Symphony, is a mix of classical, Brazilian and contemporary music for the marimba. Percussive Notes magazine comments: ?Saudacao features some of the best and most advanced repertoire for the marimbist, exquisitely performed by David Hall?it will be a standard recording in years to come for everyone to gather inspiration and insight?.

A native of Concord, Massachusetts, Hall began playing percussion at the age of ten eventually studying with Fred Buda and Everett Beale of the Boston Pops Orchestra. His passion for music led him to Ithaca College where he first became aware of the marimba's potential at Gordon Stout's faculty recital. He completed his Masters at the Eastman School of Music with John Beck and was awarded the prestigious Performer's Certificate. While attending the Aspen Music Festival, Hall won the Concerto Competition in 1985 and 1987 performing the Creston and Kurka Marimba Concertos. Also, he had the honor of working with conductors such as Leonard Bernstein, Seiji Ozawa, and John Williams as a Fellow in Percussion at the 1986 Tanglewood Music Center.

Mr. Hall has been the Assistant Principal Percussionist and Assistant Timpanist with the Grand Rapids Symphony since 1987. He was Acting Assistant Professor of Percussion at MSU from 2003-05 and currently is teaching at CMU for the Fall of 2008. He is a member of the Michigan Touring Artist Roster and is represented by Great Lakes Performing Artist Associates. Mr. Hall lives in the Forest Hills area with his wife Caroline and two sons, Benjamin and Evan.