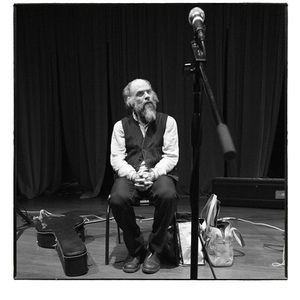 "Daniel Higgs was born in 1964 in Baltimore, Maryland. parallel practices of art, music, poetry, and dance begun at various young ages and are even now continuing to converge on a single practice, which may be compared with or identified as one's own experience of reality offered in reckless worship and sacrifice to the mystery deity hiding within us, around us, and, truly, occluded by our experience of it in our professed knowledge and ignorance." -Guess Who

Daniel Higgs, greatly inspired by bands such as the Sex Pistols, Black Flag, and Minor Threat, as well as acknowledging Devo as a major influence (lyrically if nothing else) formed the locally popular Baltimore art-punk band Reptile House in the mid 1980s, which he fronted. Opening for many "major" bands that came through the Baltimore area, Reptile House gained a large local following, and embarked on several U.S. tours. In the process, Higgs befriended Ian Mackaye (Teen Idles, Minor Threat, Embrace, Fugazi), who helped to put out the one and only Reptile House full-length. The now-legendary Lungfish music band immediately rose from the ashes of Reptile House, and in between that band's activity, Daniel keeps busy by performing solo sets involving jews harp, guitar, and vocals, in addition to creating many other forms of art.

Higgs was also involved in a side project with fellow Lungfish member Asa Osborne called The Pupils in the early 2000s. Their sole eponymous release was put out by Dischord Records in 2002.

A new album of solo material, entitled "Ancestral Songs," was released on Holy Mountain records in the Fall of 2006.

It has been announced by the independent label Thrill Jockey Records that they will be releasing a CD/Book combo authored by Daniel Higgs sometime this year (the first release in the music/book series was by Aki Tsuyuko). According to the Thrill Jockey website, the music/book series "gives each artist the opportunity to fill an entire book with artwork inspired by or related to the music that comes with it."

It has just been announced that yet another solo album, "Metempsychotic Melodies," will be released via Holy Mountain records on October 23rd in the U.S.