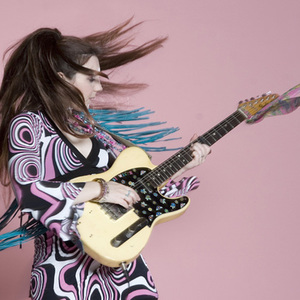 Having been exposed to a range of music genres as a child, ranging from 60s and 70s Motown and Stax records, to Chicago Blues, and being encouraged by her father to start gigging the local pub circuit whilst still in her early teens, it was clear to see that Dani Wilde was already well on her way to becoming somewhat of a special talent. When asked what made Dani decide to become a blues singer she replied "Well, when I was 14...

When asked what made Dani decide to become a blues singer she replied "Well, when I was 14, I went to Bishopstock Blues Festival in the UK and that was where I saw the likes of contemporary blues singers Sue Foley, Shemekia Copeland and Susan Tedeschi perform. Before then I had only heard the old Chicago players like John Lee and Muddy Waters but to see young female artists playing the blues like that really blew me away and so I made it my mission to follow in Susan Tedeschi's footsteps. Her performance was inspirational and had a life changing effect on me in regards to my music career."

Dani's first break came when she was asked to sing backing vocals for famous 1960s British Folk singer Maddie Prior. Maddie was so impressed by Dani's soulful voice that she asked Dani to support her at The Wyvern Theatre, Swindon. The concert sold out and the audience were more than impressed by Dani's passionate vocal delivery and finger picking blues guitar style.

2003 saw Dani arrive in Brighton where she spent four years establishing herself in the South of England and worked towards a 1st Class BA honours Degree. Within her first year here, Dani played larger venues including The Komedia and Concorde 2 and by 2004, Dani's success had further increased, headlining at the Brighton Live Festival, giving regular live performance and interviews on BBC Radio Stations and rave reviews from national press.

Whilst Dani was studying for her Music Degree, she established a charity project raising money for County Primary School in Embu Kenya. By hosting regular concerts in the South of England Dani raised enough money to provide the underprivileged school with music education facilities (treble, descant and tenor recorders to form a large recorder group, other musical instruments and music books) and also to renovate two dilapidated classrooms. This fundraising project is ongoing and Dani hopes to visit Kenya in 2008 to teach at the school and perform a community concert. For more information on the project please take a look at www.myspace.com/embuprimaryschool

2006 saw Dani along with her younger brother Will 'Harmonica' Wilde and the band playing some great concerts including The Royal Albert Hall, supporting Jools Holland and Vibes in The Vines Festival with Gary Moore.

In September 2007, Dani's dream came true when she signed a record deal with Top International Blues Label Ruf Records. Her debut album, produced by Mike Griot and recorded in Germany in December 2007 will be released in early 2008.

In 2008 Dani will be touring Europe on The Blues Caravan Tour with fellow Ruf artists Candye Kane and Deborah Coleman. In between the legs of the Blues Caravan she will also be touring up and down the UK. Please keep an eye out on her website www.daniwilde.com for more information and tour dates.
"She releases a sort of diesel roar from her throat, pierced with little darts of high falsetto. It is like two voices. She sings the old twelve bar blues "I'm In The Mood", whooping and slurring like an old boy from the Delta. The place goes mad, as if it can't quite believe what it's heard."
http://www.daniwilde.com