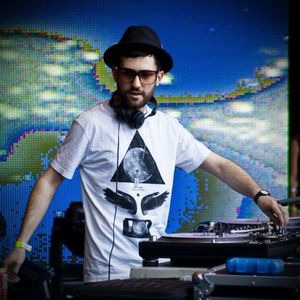 From label boss, hit producer, World Champion DJ, trendsetter, genre-mangling party-starter, to blogger extraordinaire, Alain Macklovitch, best known as A-Trak, embodies the full scope of the 21st Century musician-entrepreneur model. At the mere age of 29, A-Trak has had two distinct phases to his winding 11 year career. Stage one: after winning the World DMCs at age 15 (in 1997), he spent years as one of hip hop's most renowned selectors.

After taking over tour DJ duties for Kanye West in 2004, just as he was beginning to combine a bigger variety of sounds into his sets, A-Trak launched into stage two: becoming an undisputed icon for a generation of kids that worship hip hop and dance music alike, and commencing a worldwide boundary-blurring takeover. It all started very early, and developed very quickly, for A-Trak. As a young teenager in Montreal, he would scratch on one turntable for his brother (of Chromeo) Dave's high school band. He begun practising, ?with the discipline of a monk?, and after winning the Canadian, and later World, DMCs found himself an honorary member of Q-Bert's legendary Skratch Piklz crew. He soon hooked up with DJ Craze and joined another famous scratch troupe, The Allies, and spent half a decade touring as hip hop's hottest turntablist crew. Five years ago, after a chance meeting with Kanye West at a London in-store, A-Trak performed his first gig with the superstar, without a rehearsal, in front of 12,000 people ? and from then on did every show with him for four years. Three years ago, after meeting the rising Chicagoan rapper Kid Sister, A-Trak began dabbling his way into production, which ? also by way of happenstance - led to the beginnings of a record label. Ironically named Fool's Gold, considering how many prosperous treasures it's unearthed, the label has gone on to become one of the most sought-after imprints on the underground radar: a cross-over idol that's wildly and unpretentiously united the worlds of club music and hip hop.

A-trak has recently made a number of remixes for artists like Digitalism, Daft Punk and Kanye West. A little known fact is that he is the brother of Dave 1, the moustachioed half of Chromeo.

Place On Earth (With Zoofunktion) (CDS)

We All Fall Down (CDS)