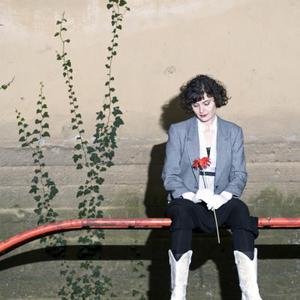 Colors in February: With her album "Happy In Grey" Damero brushes the winter in the most beautiful shades. Great feelings held covered in a warm grey. BPitch Control sneaks a new romanticism into our ears. Peculiarly distinctive (simple?) yet incredibly beautiful melodies are carried by a smooth voice over a sea of fabulous beats and partly clubby, partly experimental sounds. Eleven oceanic ear candies, both powerful and fragile, even bring your headphones to catch their breath.

Happy In Grey surfaces the essence of overwhelming melodies and sighful feelings from the joyful depth of the winter sea. The mermaid behind these wonderful songs/tracks is Marit, the kind-hearted lady at the BPitch promotion counter. When Ellen Allien accidentally heard Marit's home made tracks, she realized at once what hidden flower was growing in her BPitch Control greenhouse. Damero, the Anne Netrebko of IDM! In fact, Damero's grasp for stirring sounds and moving melodies is based on a classical music education, that Marit underwent first as a little girl in East Germany and later on in France, Italy and the U.S. where she took singing lessons with some of the best voice teachers. At the same time she also collaborated and jammed with different musicians of the electronic and independent music scene in Berlin, like Apparat and Modeselektor. Now, on her first own release you can listen to the result of all theses different influences: haunting pop-melodies, charming dance anthems for the soul! Wrapping Damero's instincts into this great piece of armchair dance music was mainly the work of Berlin producer Henri Hagenow, who polished six of Marit's little grey diamonds. Apparat, AGF, Zander VT, headkit and Nevis Peak also contributed to the brilliance of this album by engraving their musical senses into the songs. Happy In Grey is an extraordinary album that tears happy eyes and wakes up grey hearts.