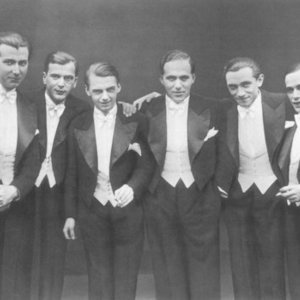 The Comedian Harmonists were an internationally famous, all-male German close harmony ensemble (5 singers and a pianist) that performed between 1927 and 1934 as one of the most successful musical groups in Europe before World War II. The group consisted of Harry Frommermann (tenor buffo), Ari Leschnikoff (first tenor), Erich Collin (second tenor), Roman Cycowski (baritone), Robert Biberti (bass), and Erwin Bootz (pianist).

The hallmark of the Comedian Harmonists was its members' ability to blend their voices together so that the individual singers could appear and disappear back into the vocal texture and were noted for using their voices to imitate musical instruments. Their repertoire was wide, ranging from the folk and classical songs arranged by Frommermann to the more appealing and witty popular songs of the day by writers such as Peter Igelhoff, Werner Heymann and Paul Abraham.

In 1927, actor Harry Frommermann was inspired by The Revelers, a United States jazz-influenced popular vocal group, to create a German group of the same format. After some initial failures, the Harmonists soon found success, becoming popular throughout Europe, touring the United States, and appearing in 21 movies.

The group's success continued into the early 1930s, but eventually ran into trouble with the Nazi regime: three of the group members - Frommermann, Collin, and Cycowski - were either Jewish or of Jewish descent, and Bootz had married a Jewish woman. The Nazis progressively made the group's professional life more difficult, initially banning pieces by Jewish composers, and finally prohibiting them from performing in public. The group's last concert was in Munich on March 25, 1934.