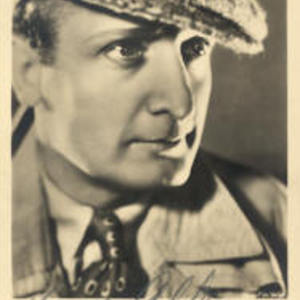 Hans Albers (September 22, 1891 Hamburg - July 24, 1960 Starnberg) was a German actor and singer. He was the single biggest male movie star in Germany between 1930 and 1945 and one of the most popular German actors of the twentieth century. He was born Hans Philipp August Albers in Hamburg, the son of a butcher, and grew up in the district of St. Georg. He was seriously interested in acting by his late teens and took acting classes without the knowledge of his parents.

He was born Hans Philipp August Albers in Hamburg, the son of a butcher, and grew up in the district of St. Georg. He was seriously interested in acting by his late teens and took acting classes without the knowledge of his parents. In 1915 Albers was drafted to serve the fatherland in the Great War (World War I), but he was, in retrospect, lucky enough to be wounded early on. After the war Albers moved to Berlin, where he found work as a comedic actor in various Weimar-Era Berlin theatres. His breakthrough performance was that of a waiter in the play Verbrecher (Criminals). It was also in Weimar Berlin that Albers began a long-term relationship with half-Jewish actress Hansi Burg (d 1975). The relationship ended only when he died in 1960.

After roles in over one hundred silent films, Albers starred in the first German talkie Die Nacht geh?rt uns (The Night Belongs to Us) in 1929. Soon thereafter, Albers played big-mouthed strong man Mazeppa alongside Marlene Dietrich in her star-making classic Der blaue Engel (The Blue Angel). Albers himself shot to fame in 1930 with the movie Der Greifer and constantly enhanced his star status with similar daredevil roles in the 1930s. He was probably at his best when teamed-up with fellow German movie legend Heinz R?hmann, as in Bomben auf Monte Carlo (1931) and Der Mann, der Sherlock Holmes war (1937). Many of Albers' songs from his movies became huge hits and some even remain popular to this day.

When the Nazis came to power in 1933, Albers and his Jewish girlfriend Hansi Burg moved to Starnberger See in Bavaria. While Albers himself never needed to show public support for the Nazi regime, he became the most popular actor under Nazi rule. The actor nevertheless, although being a party member, avoided an overly close association in public. As the ultimate sign of his popularity, the Nazis even silently accepted his relationship with Hansi Burg for a long time. But Albers finally gave in to the pressure. Hansi Burg went to Switzerland and then to Great Britain in 1939, but they secretly remained a couple with him even managing to send her financial support. They were reunited after the war, when she returned to Germany in a British uniform.

In 1943, Albers was paid a huge sum of money to star in Ufa's big-budgeted anniversary picture M?nchhausen but was careful not to give the impression that he was endorsing the National Socialist regime, which was indeed, never asked of him. Also in 1943, Albers starred in another classic German film Gro?e Freiheit Nr. 7 with actress Ilse Werner. Some of the scenes are said to have been be shot in Prague because of bomb damage to Hamburg. The sailing ship "Padua" for the outdoor scenes of the film has survived under Soviet and Russian flag until this day as "Krusenstern".

After World War II, well-funded Albers avoided the financial plight and professional banning many actors faced on account of his association with Hansi Burg. Nevertheless, German "heroes" were considered undesirable by the occupation government that wanted to promote their own. This accounted for a major break in his career and made him hard to cast. Eventually he found an opening with respectful wisdom-with-age type character parts with some public acclaim, but with these never again enjoyed the huge stardom of the 1930s and early 1940s. By the early 1950s, his age finally showed and his powerful presence and freshness was almost gone. This was promoted by his increasing alcoholism during the 1950s. Yet he remained active in movies until the very end. Albers died in 1960 in a sanatorium near the Starnberg See of internal bleedings. The whole nation mourned his loss.

Taking a position in Germany that roughly corresponds with that of John Wayne in the USA, Albers' name will forever be closely associated with the North German port city of Hamburg, and especially the Hamburg neighbourhood of St. Pauli, where there is a square named "Hans-Albers-Platz". Today he is probably more known for his music than his films, and his music is still widely-known in modern Germany, even among young people. Outside of Northern Europe, however, Albers remains virtually unknown, although the image of an older man in a seaman's cap and raincoat playing accordion and singing may be recognised by many outside of Germany, even if they don't know that this image is based on Hans Albers. As a case in point, McDonald's used such an image in an American television ad campaign in 1986. In reality, Albers had no experience on the water, this being restricted to a one-day trip to Heligoland.

Many of Albers' songs were humorous tales of drunken, womanizing sailors on shore-leave, with double entendres such as "It hurts the first time, but with time, you get used to it" in reference to a girl falling in love for the first time. Albers' songs were often peppered with expressions in Low German, which is spoken in Northern Germany. His most famous song is by far "Auf der Reeperbahn nachts um halb eins," ("On the Reeperbahn at half past midnight") which has become the unofficial anthem of the colourful neighbourhood of St. Pauli. The Hans-Albers-Platz, one block south of the Reeperbahn, has a statue of Albers, by the German artist J?rg Immendorff.