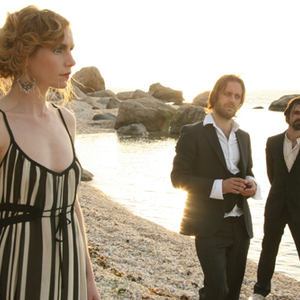 A Camp first drew breath in a forest in Northern Sweden, neck deep in snow, in the waning of the last millenium, amongst families of foxes. It began a collabrative effort between two Swedish humans: Nina Persson, whose band The Cardigans had seen crazy success in the roaring 90s, and Niclas Frisk, a sonic wanderer who had himself enjoyed pop stardom with his band Atomic Swing. In common was a love for classic American music, and a melancholy both universal and somehow highly specific to the Scandinavian psyche.

It began a collabrative effort between two Swedish humans: Nina Persson, whose band The Cardigans had seen crazy success in the roaring 90s, and Niclas Frisk, a sonic wanderer who had himself enjoyed pop stardom with his band Atomic Swing. In common was a love for classic American music, and a melancholy both universal and somehow highly specific to the Scandinavian psyche.

It was imported maple syrup, chickory coffee, and the around-the-clock blackness that is the Swedish winter that fueled the first stage of the recording sessions, those that would eventually evolve into the self titled A Camp debut record .

The duo recorded a collection of songs in 1998, but the project was suspended while they attended to other matters......in Nina's case, it was another Cardigans album (Gran Turismo) and tour. Niclas moved on to a temporary foyer into profane gospel music. Also in the cards for Nina was a move to New York City with future-husband and fellow rocker Nathan Larson, an american film composer who had known some modest success in the 90s with his band Shudder To Think.

After a span of about three years, Nina choose to saddle up again with A Camp. Listening to the earlier sessions, she found them wanting for a certain frailty......it was with this in mind that she picked up the phone and rang indie superhero Mark Linkous of Sparklehorse, asking him to produce future A Camp recordings. Mark, at home on his ranch in rural Virginia, quietly accepted this task, changed the oil in his truck and drove north.

The second batch of recordings for the first A Camp record took place in the Fall, in Woodstock, New York, at the now-dufunct Bearsville studio. Work took place in a barn. Deer loitered on the lawn. Nathan played bass. Kevin March (Dambuilders/ Shudder To Think/Guided by Voices) played drums. Mark made spooky noise, drove his Motoguzzi, and engaged in target practice. Nina sang, chain smoked, and read books on dream interpretation. Niclas flew in and played guitar like a hero, despite having sustained massive aural damage that obliged him to wear industrial ear protection.

The resultant album was released in 2001 in Europe, where it was a considerable success, and a significant hit in Nina and Nic's home territory of Scandinavia. The band toured extensively on the strength of the single I Can Buy You: Nina's touring band included members of Soundtrack Of Our Lives as well as the above mentioned studio players. The album was awarded 4 Swedish Grammies, and met with much critical praise abroad and stateside, despite the record's availability only on import. And that was that, for the time being.

In late 2007, for no particular reason, A Camp was taken out of storage. This time around, what the first album had been to the country the second was to the urban back-alley, past and present. TImes had changed the cast a bit; Niclas had recently made the move to New York, went nocturnal, bought a top hat and a moleskin overcoat and commenced floating about the lower eastside. Nathan and Nina had moved uptown to Harlem. This time around, the approach was more that of a proper band, and the NYC recording sessions were swift and efficient, buffered by Nathan's increased involvement, who at this point was a highly accomplished film composer, and brought all his skills in the area to bear. Added to this Kevin March's supercharged drumming, despite or due to his newfound stay-at-home dad status. Joan Wasser, Nikolai Dunger, James Iha and other notables once again rounded out the cocktail.

The second album, Colonia, was released in January 2009.

I Can Buy You (Single)