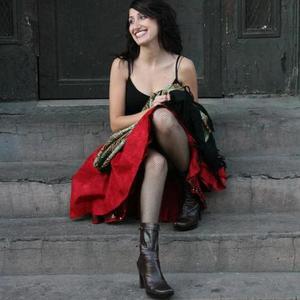 Amid the turbulence in today's music industry, CLARA LOFARO is an old soul in a young body with an independent spirit. The Toronto transplant inherently believes her music must always possess the timeless qualities of the old and the new to have a sustainable future. After all, she's building a lasting career which is just impacting America with the release of Perfekt World, her third album on ComeTrue Records, the label she started as a student at the Berklee College of Music.

After all, she's building a lasting career which is just impacting America with the release of Perfekt World, her third album on ComeTrue Records, the label she started as a student at the Berklee College of Music. Now based in New York, the Toronto Indie Week winner breaks through musical barriers; fueled by the gift to create music that makes us FEEL something. Because when it comes down to it, Lofaro knows that's the primary reason people have always listened to music.

?I want to make music that's great because it gives people an experience,? she says. ?I'm not following a formula other than always trying to give a song something different to make it my own, unlike anything else I've ever heard.?

Produced by Mark Turrigiano (Ingrid Michaelson's, Boys and Girls), Perfekt World continues the tradition of the new-age female singer-songwriter carved out by such mainstream mainstays as KT Tunstall and Amy Winehouse. Clearly inspired by Annie Lennox, John Legend and Laura Nyro, Lofaro is an eclectic songwriter and soulful performer whose music embraces pop, rock, R&B, jazz, and any number of stops in between. It starts with a radio-free childhood restricted to oldies and traditional recordings until she reached her teens, due to a conservative Italian upbringing.

?I'm sure that's why I always use my voice as an instrument in many ways. Those harmonies are very instinctive when I write songs. They just come out of me. When I think of instrumentation, I feel every part has to be strong and stand out on its own independently.?

That voice is in full evidence on Perfekt World, from the quirky, trash-talkin' torchiness of ?Bitch Go Off? to the crystal clear sweetness of the hopeful lead track, ?Birds of a Feather.?

Lofaro's independent musicianship began formulating when she took up music at 12. Her prodigious talent as a singer and keyboardist eventually led to her acceptance at Berklee, where teacher Barry Marshall, who'd worked with LaVern Baker, Peter Wolf and Aimee Mann, brought Lofaro into the studio to produce her 2002 debut, Night Light. With loyal audiences developing in Toronto and Boston, she took over as producer, exposing all on her ballsy second album, 2005's Black + Blue Pearl, a top seller on CD Baby. The album picked up radio airplay on New York's WLIR and college stations throughout the Northeast, while 106 VIC radio in Ithaca, NY, named the track "One True Thing" 2006 Song of the Year.

The success of that album brought Lofaro to opening slots on sold-out shows with Emerson Hart; side stage acoustic performances with Stevie Nicks and OAR at Jones Beach on Long Island; and the Bamboozle Festival at Giants Stadium. Audience voted Lofaro second favorite at a Fresh 102.7 outdoor concert featuring Edwin McCain, Kimberly Locke and others. That fall, Lofaro beat over 450 entrants to take top honors in Toronto's Indie Week as the city's best unsigned talent.

She subsequently returned to the studio with producer Turrigiano to create Perfekt World, an album combining the best of both worlds; the old and the new, on every song, regardless of style. To Lofaro, a mixture of the old and the new is what life is anyway, and with a full realization and dedication to that essential balance, who needs to rely on trends?

?I've always been the most popular girl in class because of who I am, not because of how I dress or how I look,? says Lofaro. ?I'm definitely not affected by trends in music.?

Lofaro and Turrigiano chose animal instinct and having fun over the fundamental ways to use instruments on Perfekt World to create a new energy hell-bent upon taking risks with a universal approach. Lofaro wanted ?No Way Home,? with its street-smart ethnicity, to sound like a bunch of old Balkan men drunk in a bar banging beer bottles playing traditional music together, because in college she loved hanging out with people from all over the world steeped in those same sensibilities. On ?Bitch Go Off,? Lofaro used an assembled drum kit made of trashcans and other discards Turrigiano picked up on Bowery in Chinatown to help convey the liberating experience of speaking one's actual inner thoughts.

?Waterfall,? the first single, is a pop-rock ballad with indie-rock appeal, yet it introduces classic psychedelia halfway through the first verse. It's about taking a chance to love again despite being hurt enough times to no longer believe it can exist. With its lilting harmonies, ?Birds of a Feather? is a ballad that opens the album by showing how we all live in our own worlds, and gain confidence from keeping the good things close and knowing we're not alone, no matter how different our perspectives or how long the road. The mid-tempo title track uses doo-wop backup vocals beneath a pop chorus for an Otis Redding groove, giving an old school vibe to modern pop.

On stage, Lofaro re-enacts the human experience, supported by a band which includes a backup vocalist and a keyboardist who doubles on flugelhorn, a delicate nod to the modal folk music she heard as a child at Sunday Mass, and still beautifully resonates from within. Whether Lofaro is performing live or in the studio, she always goes for the chills eternally induced by her greatest influences, with a deeply wondrous passion usually reserved for legends.

She has recently partnered with Action Against Hunger (ACF), a non-profit, non-discriminating, international organization, donating 20% of proceeds from Perfekt World album sales, and collaborating on a video that will use Perfekt World to complete her vision of reaching and helping people with her music. ?If we could find beauty in each other's differences instead of thinking our way was better, life would be a heck of a lot easier,? she says. ?It's raw, emotional music with no barriers. Freedom-pop is what I'd call it. If we could embrace this life before it passes us by ? I'm still trying to get there.?