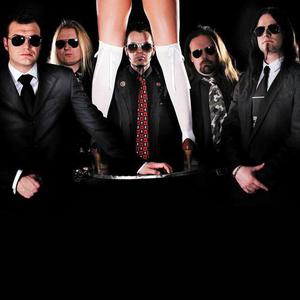 Chrome Division The Essence of Rock and Metal music. It's all about sex, drugs and Rock ?n Roll. Or as they put themselves: Booze, Broads and Beelzebub! It all began the summer of '04. Shagrath of Dimmu Borgir summoned his long time friends Lex Icon of The Kovenant and Luna of Ashes to Ashes. Respectively on drums and bass guitar. During months of rehearsing and beer drinking, the band took shape.

Then Luna contacted Eddie Guz, from the rock ?n roll band The Carburetors. January '05 this sneering bulldog entered the rehearsal place, and he fitted the band like a glove. And for the extra hot spice Ricky Black was dragged in. And from day one he delivered amazing guitar bending solos. From this point it was evident that Chrome Division was to be more than just a side project.
From now on they were like a force, spawning stripped down groovy Rock'n Roll, with a primitive attitude. Also labelled as Doomsday Rock'n Roll.
A slight drawback was in summer '05 when Lex Icon had to leave the band. However the replacement was imminent. Tony White from the singular band Minas Tirith, came pronto. He's a steady and deadly precise drummer. So the band continued even stronger.
These five Norwegian road bandits, have the ability to grasp the finer elements of their influences and mould them into their own vital Rock sound. Influences hailing from when the members grew up, in a time when classic Rock and Metal bands were at their peek. Such as Mot?rhead, Iron Maiden, Metallica, AC / DC, Venom etc. etc.
Chrome Division entered Panser studio in Oslo, December '05. Recorded one half of their debut album. Got a record deal with the German monster label Nuclear Blast. Then got back in March and finished the album. It was released in July '06, titled simply: ?Doomsday Rock'n Roll?, together with a fresh music video of the song ?Serial Killer?, made in Sweden by Patric Ullaeus. They held a memorable release-concert at the legendary Elm Street club in Oslo. Then Shagrath got occupied with Dimmu Borgir for a while. Both making an album and going off on several gigantic tours all over the world. After a while Shagrath rejoined the Chrome guys, exhausted of touring in the name of Satan, hungry for more rubber-smelling Rock. It was time to create another Chrome album.
In January '08 they've conjured enough kick-ass songs and went to Studio Fredman in Sweden, to record the follow-up to the successful debut. Now Chrome Division had entered a higher level. The sound and the songs were even higher in quality.
The album, entitled ?Booze, Broads and Beelzebub?, holds 11 songs of strong Chrome-quality and a cover of ZZ Top's classic ?Sharp Dressed Man?. The material are generally harder and more nasty, yet it's more focused on choruses that are catchy as hell.
Chrome Division's second album gets unleashed in July ?08 Unholy Rockers worldwide: Join with the Division and live your life like a Rock ?n' Roll Rebel!