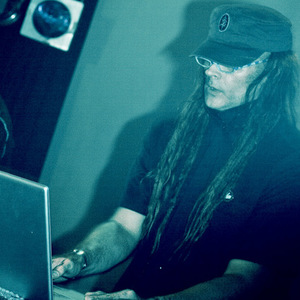 cEvin Key (cEvin pronounced like "Kevin"), is the adopted name of Kevin Crompton (b. February 13, 1961), a founding member of the industrial music band Skinny Puppy, along with nivek ogre. In addition to his work with Skinny Puppy, cEvin Key has had several side projects; including Doubting Thomas, Cyberaktif, Hilt, & The Tear Garden. He was also at one point a drummer & song-writer for synth-pop group, Images In Vogue.

After Skinny Puppy's disbanding in 1996, cEvin Key's main project was experimental electronic group Download, as well as some solo releases. He also embarked on a side project with Phil Western (Plateau), a side project with Paris Sedonis (Involution), & released another Tear Garden album in 1999, "Crystal Mass." However, Ken Marshall 'Hiwatt' is credited 50/50 for his role on "The Dragon Experience" LP, & so it is considered as the same project instead of a separate one going by one of the various names like cEvin Key & Ken Marshall 'Hiwatt.'

Much of 2001-3 was spent on ?The Dragon Experience? as well as filling the drummer role on ohGr's tour. Then came the Skinny Puppy album, ?The Greater Wrong of the Right? as well as the Vault series; releases of previously-unheard material from his various projects available through subCON. Some albums included in the series were Skinny Puppy's ?Puppy Gristle?, Download's ?III Steps Forward?, ? inception : the subconscious jams 1994 - 1995?, The Tear Garden's ?Eye Spy With My Little Eye?, PlatEAU's ?iceolater?, & Hilt's ?The Worst Of The Flu 1985-1989.? Most recently from subCON, series 2 from the vAult bundle included bonus releases such as Skinny Puppy's ?Back & Forth Vol. 7?, Download's ?FiXeR?, & Plateau's ?Kushbush.?

cEvin has said he is currently working on new Puppy material, LP #3 for SPV, which includes "some extreme forms of heavy" with 3 pieces handed over to 'Hiwatt' Marshall along with 19 pieces of "Scaremeister" (a project / nickname given to cEvin after meeting Schwarzenegger on the "End of Days" set.) Otto Von Schirach joins the Scaremeister project in collaboration, which is now in full swing with 'Hiwatt'.

The Ghost of Each Room [US-Import]