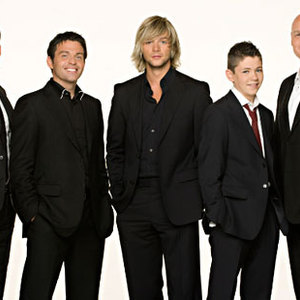 Celtic Thunder is a singing group composed of male soloists (Damian McGinty, Keith Harkin, Ryan Kelly, George Donaldson and--as of 2010/2011--Emmet Cahill, who is replacing Tenor Paul Byrom) who perform both solo and ensemble numbers. Their latest album saw them being joined by Neil Byrne, who played guitar and sang backup on the previous albums. Celtic Thunder debuted in August 2007 at the Helix in Dublin, Ireland, accompanying the Celtic Concert Orchestra under the direction of Phil Coulter, the musical director of the group.

Following the success of their last four shows, the new Celtic Thunder show Heritage accentuates the musical culture of Ireland. The program and accompanying CD and DVD features 12 new recordings including: "An Irish Blessing", "A Place In The Choir" and "Whiskey In The Jar". In 2011 March PBS pledge will feature Celtic Thunder's Heritage airing the program over 1,000 times. In the fall of 2011 Celtic Thunder Heritage will be back on tour. Over the past 3 years Celtic Thunder has been one of the most successful PBS music programs, and last year they sold over 100,000 concert tickets. Sure to be known as another Celtic Thunder Classic, the Heritage CD & DVD are now available for pre-order, and will be released on February 22nd, 2011.

Celtic Thunder is known for its eclectic style with songs ranging from a soloist to an ensemble focus. The group is backed by the Celtic Thunder Band on their concert tours, and their live shows are known for the use of dramatic effects via lighting and choreography as well as a stage set resembling an ancient stone pathway suggestive of those referenced in Celtic lore.

The members of Celtic Thunder are (in alphabetical order of family name):

Neil Byrne: Music has always been a major part of Neil's life. Born into a musical family, Neil's father has worked as a professional musician his entire life and his mother is a huge fan of all music. By the age of 5, Neil was gripped by rhythm, which instinctively lead him to drum on anything in front of him. He began learning the guitar when he was 7, hugely helped and encouraged by his father. Later in life a mutual friend approached Neil and asked him to play at a function for one of Ireland's most renowned songwriters and producers, Phil Coulter. When Sharon Browne and Phil began working on production for Celtic Thunder he was invited to record backing vocals for the debut DVD, and subsequently play lead guitar player for the live show. Neil would have to say the most memorable and prestigious performance of his career to date was in Radio City Music Hall in New York City. Since then he has toured America and Canada extensively with Celtic Thunder and most recently has joined the cast as the 6th leading vocalist with Celtic Thunder.

Paul Michael Byrom (born April 11, 1979) is from Dublin, Ireland. In addition to Celtic Thunder, he has also performed at major sporting events in Ireland and abroad, including singing at the All Ireland Finals in Dublin's Croke Park and at Heinz Field for a Pittsburgh Steelers game in the USA. He has also performed for Ireland's President, Mary McAleese, and for Emperor Akihito of Japan. Paul has released two albums: Velvet and I'll Be Home For Christmas. He left Celtic Thunder as of 2011 to pursue his solo career. Member from 2008-2011

George Donaldson (born February 1, 1968) is the oldest member of the group and is a well-known balladeer, guitarist and flutist from Glasgow, Scotland. At Scotland's Celtic Park, Donaldson played to 65,000 fans at the opening match of the 2000-2001 season.

Keith R. Harkin, (born June 10, 1986), like Damian, is from Derry, Northern Ireland. He plays the guitar and has written one of the songs for Celtic Thunder: "Lauren and I". In 2008, a new solo album by Keith was rumoured to be in the working stages but has not yet been released as of mid 2009. Keith enjoys surfing and has written a song called Chasing Dreams that articulates his love for it. Keith has now recorded more original songs apart from Celtic Thunder, some titles include: Vanity, Don't Lose the Feeling, and What I Like.

Ryan John Kelly (born November 6, 1978) is from The Moy, County Tyrone, Northern Ireland. He holds two degrees from the Queen's University Belfast, having earned a Bachelor of Science in Accounting and also a Graduate Diploma in Advanced Accounting, qualifying Ryan to be a chartered accountant.

Damian Joseph McGinty, Jr. (born September 9, 1992) is the youngest member of the group and is from Derry, Northern Ireland. He recorded the first Celtic Thunder album when he was only fourteen years old. It is rumoured that Mc Ginty will begin work on a solo album in the next 6 months.

2010 was a very exciting year for Emmet Cahill; he was awarded the 2010 John Mc Cormack Bursary for the most Promising Young Tenor, and was named the most promising young singer at the Royal Irish Academy of Music. He has been a multiple prizewinner at the National Feis Ceoil singing competition in Ireland. Emmet is 20 years old and hails from Mullingar in County Westmeath in Ireland. His musical journey began when at just 5 years old he began learning the piano. By 7 Emmet had begun voice training, and he soon went on to win a music scholarship for high school in Mullingar and spend 5 years intensively studying and playing music. At school he furthered his studies in piano, organ and violin and vocal training, however singing has always been his true love. He continued his education at the prestigious Royal Irish Academy of Music where he received a university degree in Music Performance. He has been in many stage productions in Dublin and has performed on stage at the Gaiety Theatre, Dublin and as a soloist at the National Concert Hall. He is an avid sports fan and has performed twice at Croke Park in Dublin, in front of crowds of 90,000. One such occasion was for the 125th Anniversary of The GAA. He has also performed for the President of Ireland Mary McAleese and at several international rugby games Dublin's new Aviva Stadium. Emmet also sings regularly at the Mullingar Cathedral.
He is a huge sports fan and has won many prizes playing football with his college and local teams. In his spare time, he also loves attending music and sporting events, playing the guitar and listening to music. He attended auditions for Celtic Thunder in June 2010 and was delighted to be asked by Sharon and Phil to join the show. Emmet Cahill is the latest addition to the Celtic Thunder family.

Daniel Furlong is the newest (and youngest) member of Celtic Thunder. Daniel is 13 years old and hails from the town of Taghmon in County Wexford on the Southeast coast of Ireland. He is a boy soprano and was discovered when he entered a singing competition at the age of seven and won! Although Daniel is barely a teenager, he has been performing and singing in public for over six years. Daniels hometown of Wexford is synonymous with Opera and is host to the internationally acclaimed Opera Festival in October of every year. Indeed Daniel is no stranger to opera and played the role of Edgar in the Wexford Light Opera Society production of Ragtime in 2008. In 2008 and again in 2009, Daniel was also cast in the lead role of Oliver in the musical Oliver with both Oyster Lane and Festival productions. He has also performed solo on two national television stations in Ireland. In 2009 Daniel won an All Ireland Song Contest as a solo singer, competing with artists considerably older than he. In 2011 he won "The All Ireland Talent" Show a nationally televised talent competition and Irelands answer to Americas Got Talent. In light of all of his incredible achievements to date, his home county of Wexford honored Daniel by naming him "Wexford Person of the Year" for 2011.

Daniel describes himself as an outgoing and optimistic, friendly and a fun person. He likes to spend time with his friends and family, and he loves the chance to perform. He is quite competitive and loves playing team sports such as hurling, Gaelic football, soccer and rounders (softball). Music is obviously Daniels passion, he practices with his local choir "The Young Wexford Singers" every week and is also learning to play the guitar and the pigeon box. Daniel came to the attention of Celtic Thunder producer Sharon Browne, when he won the All Ireland Talent Show" and she quickly arranged to meet him. His energy and enthusiasm is infectious and once Sharon had met Daniel and seen him perform, she immediately offered him a place in Celtic Thunder. He performs an angelic version of Walking In The Air in the Christmas show and also sings solo in Heritage on Somewhere Over The Rainbow and the Josh Groban hit To Where You Are. Daniel also joins with other members of Celtic Thunder in the Ensembles and performs duets with Keith and Emmet.


Beginning in March 2008, the group has been featured throughout the US on the PBS television network more than 1200 times, and during May and June 2008, members of the group were interviewed on dozens of local PBS stations during performances of their show

Celtic Thunder is also the name of a traditional Irish band formed in 1977. The band recorded three albums?1981's Celtic Thunder; The Light of Other Days (1988), and Hard New York Days in 1996.

The Show (With Phil Coulter)