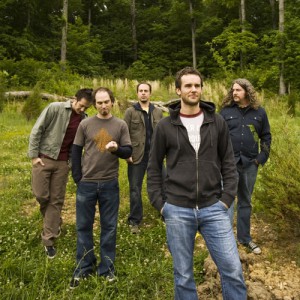 Some bands insist on dragging listeners into their world, but Richmond, VA's Carbon Leaf works towards a more admirable and considerably more difficult goal ? that of letting perfect strangers feel that the band understands their world. Since 1992, the band has succeeded in doing just that -- and on its third Vanguard release, Nothing Rhymes With Woman, has created a soundtrack suitable for multiple worlds.

?For me, this is an album that's focused on growth and maturity, but it's not deadly serious,? says front man Barry Privett. ?I wanted to examine my life and the lives of my family and friends and do it with a little bit of a wink. The last thing I wanted to do was get all dark and overwrought.?

Privett and his bandmates dodge that pitfall with aplomb on Nothing Rhymes With Woman, the much-anticipated follow-up to the acclaimed 2006 offering Love, Loss, Hope, Repeat. As ever, the quintet -- recently joined by drummer Jason Neal, a veteran of the southeast's club circuit, and Seattle bassist Jon Markel -- challenge themselves and listeners by steadfastly refusing to retrace old steps, bringing in like-minded collaborators (like Toby Lightman, who brings a burnished tone to her vocal parts on the gritty ?Meltdown?) and taking off in plenty of new directions of their own accord.

That sense of freshness, to hear Privett tell the tale, has a lot to do with the relaxed nature of the disc's recording, which took place in their Richmond, Virginia backyard. ?This time, we did something we hadn't done in a long time, and that was to just throw away the timeline altogether,? says the singer. ?We waited until everyone believed in every single song without any doubt or questions. It was a return to the days of doing music for the sheer joy of just doing it.?

The joy he's talking about proves contagious throughout the 13-song disc, both in sonic touches like the soaring harmonies that buoy ?Indecision? and the instantlyrelatable vibe of narratives like the nostalgic childhood flashback ?X-Ray.? The tones are certainly varied -- things get more than a little misty on ?Pink,? a poignant tale of a woman battling serious illness -- but they're invariably free of artificiality. Every color here is one that one can find in nature.

?A lot of the songs are about getting back to your roots,? says Privett, who reckons the band gained a lot of traction by spending a considerable stretch of time close to home, as opposed to its usual relentless touring slate. ?You know, holding onto the touchstones that keep you grounded in reality. They're easy to lose sight of sometimes, and often you need reminding. Fortunately, we have friends and family that will do that in no uncertain terms.?

Nothing Rhymes With Woman finds the Virginia-based band firmly in touch with its roots -- the Celtic tinge that cloaks ?Pink? is reminiscent of Carbon Leaf's passel of self-released discs. Throughout the set, however, the quintet affirms a commitment to moving forward, kicking out the jams a bit more aggressively on the sinewy walking blues ?Another Man's Woman? and interpolating the rich organ playing of longtime Dave Matthews Band keyboardist Butch Taylor on several tracks, including the arresting opener ?Indecision.?

?It's always been really important to us to keep an organic feel to what we do,? says Privett. ?For us, recording this album was like a renewal, kind of like the coming of spring. In a way, it's very sensual, very sexual, gentle and mellow in spots, but also acknowledges a fair share of optimism and a re-awakening to new possibilities.

In 2004, Vanguard released Carbon Leaf's breakthrough disc, Indian Summer, which earned rave reviews from sources like The Washington Post, which marveled at Privett's ability to ?capture the emotional ache of a twenty-something as he watches his friends scatter to the four corners of the world?. For the next year and a half, the quintet would set about winning over audiences while on tour -- a recipe that helped "Life Less Ordinary" and "What About Everything?? up the charts.

That winning streak continued with Love, Loss, Hope, Repeat, a darker collection, recorded in Nashville, that showcased other facets of the Carbon Leaf sound and rose to number-three on Billboard's Top New Artists chart. ?We definitely stretched ourselves on that album,? says Privett. ?It was unsettling in a way, but definitely helped us find ourselves.?

Reunited with producer John Morand, who manned the board for Indian Summer, Carbon Leaf takes the proverbial next step on Nothing Rhymes With Woman. The multiinstrumental web woven by Carter Gravatt and Terry Clark provides a perfect backdrop for Privett's tenor, which hovers ethereally on ?Lake of Silver Bells? and cuts with the precision of a knife wielded by a master chef on the poignant ?Miss Hollywood.?

?I think 'Miss Hollywood,' like a lot of the album, has a kind of feminine energy, which helps explain the title,? says Privett. ?It's that balance of strength and fragility, of keeping dreams in check, but not forgetting where they came from. It's a positive and nurturing energy, and that's the feeling we'd like people to come away with when they listen to the album.?

Nothing Rhymes With Woman